'Get the (expletive) out of my way': Woman assaulted outside Queens bakery

Police in Queens are searching for a man who assaulted an Asian woman waiting in line outside a bakery Tuesday afternoon.

FLUSHING, Queens (WABC) -- Police in Queens are searching for a man who assaulted an Asian woman waiting in line outside a bakery Tuesday afternoon.

It happened just before 2 p.m. on Roosevelt Avenue in Flushing, where authorities say the man got into a verbal altercation with the 52-year-old woman.

"Get the (expletive) out of my way," he allegedly said before pushing the victim.

She fell and hit her head against a news stand box and was rushed to New York-Presbyterian Queens in stable condition.

The 52-year-old victim's son said she needed about 10 stitches to close the gash down her forehead after hitting it on the metal newspaper stand.

Witnesses said the suspect was cursing at the victim moments before he unloaded onto her.

"The guy just peeped out of the coffee shop and he goes 'I'll eff you up!'" witness Derrick Chan said. "And then all of a sudden he comes out and tosses like a box of spoons at her. And then just does a football sack and pushed her to the ground."

Police are searching for a man seen on surveillance camera wearing a red hoodie with a green jacket and gray pants. At this point, the incident is not being investigated as a hate crime.

Some celebrities have taken up the cause, led by actress Olivia Munn. 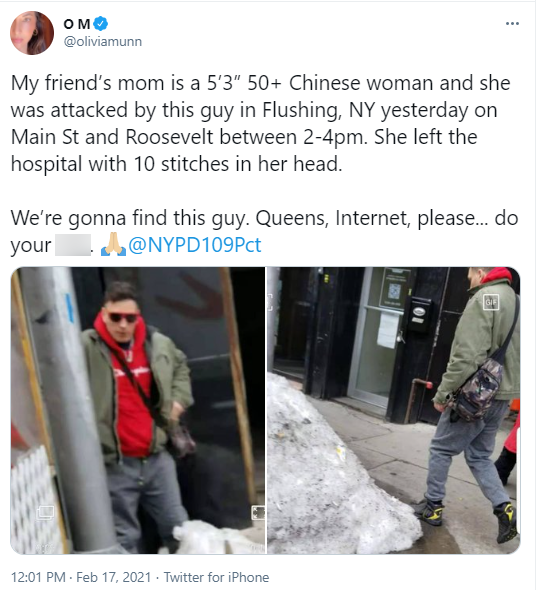 Munn has been speaking out about an increase in crimes against Asian Americans across the country during the pandemic. Last week, she said in an Instagram post that she's found herself "at a loss for words at the rise of Anti-Asian hate crimes," which "have spiked since Covid and continue to increase."

"Hate crimes against Asians Americans have become so bad that in just the past week a 91-year-old Asian American was attacked from behind as he walked down the street in Oakland, an 84-year-old Thai American was murdered in San Francisco, a 64-year-old Vietnamese American woman was assaulted in San Jose and a Filipino American man was slashed in the face in Manhattan," Munn said in the post.

Awkwafina and Gemma Chan have also posted about the incident.

The victim's son said although she was in pain and in shock, that didn't stop her from running errands on Wednesday.

"Nothing is stopping that woman," he said. "I can try. I asked her to stay home. She's not stopping. There's no one that can stop her, I can't stop her."

The attack is the latest incident in a disturbing trend happening nationwide. In recent weeks, there has been an alarming spike in vulnerable Asian Americans becoming victims of unprovoked assaults.

According to the NYPD, there were 29 anti-Asian hate crimes reported in 2020. They say 24 of those hate crimes were instances of COVID xenophobia.

The three attacks on Tuesday are not currently being investigated as hate crimes.