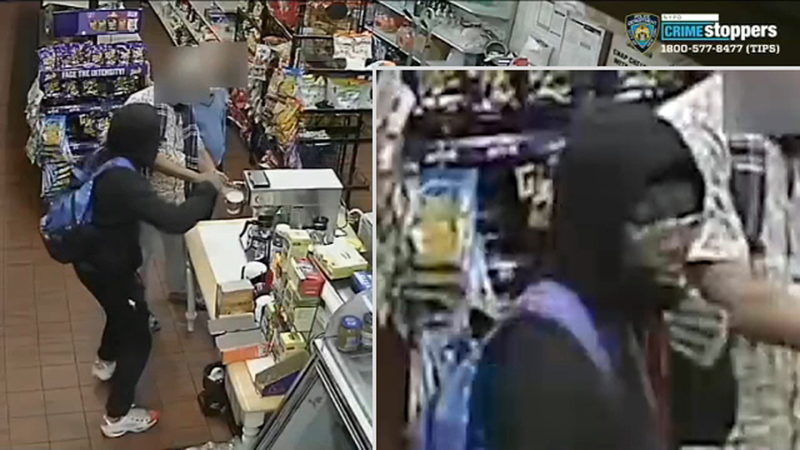 JAMAICA, Queens (WABC) -- Police have released video of a terrifying attack inside a Queens deli.

The suspect, wearing a hoodie with a mask under his chin, stabbed two men during a robbery Saturday night inside MSK Deli in Jamaica.

Police say he covered his face before stabbing a 67-year-old man in his chest, head, and stomach.

He then lunged at the man sitting behind the counter, also 67, and stabbed him in the chest and back before fleeing with $400 from the register.

Luwana Tanas is a regular customer and friend of both men.

"It was very intentional," Tanas said. "I don't know if he thought it through."

Deli workers say the first victim is a friend of the employee, who customers describe as a hard working and friendly man.

"Very nice," customer Ranna Lee said. "Sometimes even when I don't have enough change, he says give it to me later."

Both victims were hospitalized but have since been released and are now recovering at home.

"It hurts," Tanas said. "He so nice, and I feel so bad because he may not be able to work for at least three months maybe."

A relative of the first victim stabbed said he is unable to speak at the moment because of a cut to his face.

The deli is re-opening, with workers still cleaning up the mess.

Tips can be called in to the NYPD's Crime Stoppers Hotline at 1-800-577-TIPS (8477) or for Spanish, 1-888-57-PISTA (74782). You can also submit tips by visiting the CrimeStoppers website at crimestoppers.nypdonline.org or by messaging on Twitter @NYPDTips.