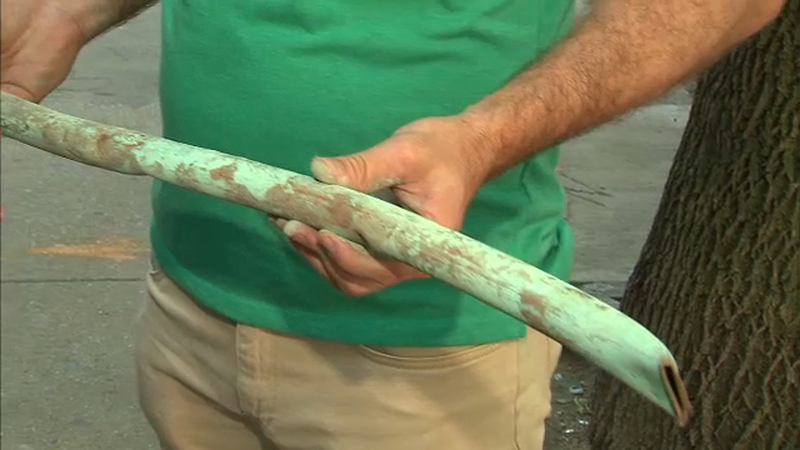 QUEENS, New York (WABC) -- Scores of Queens homeowners were suddenly faced with a gusher of costly problems related to leaky pipes in front of their homes -- and now residents want someone to take responsibility.

The frustrated homeowners from Jamaica Estates, Rosedale and Flushing have spent tens of thousands replacing the copper pipes that carry water from the water main in the street to their homes.

The problem is caused by stray direct current, or DC, that's corroding their pipes and causing the leaks. This specific type of corrosion is called electrolysis.

Copper pipes should stay intact for about 60 years, but some Queens residents said they've already replaced their pipes several times.

For the past four years, retired New York State Trooper Mike Sweeney and his neighbors have had a stream of water running down their block.

"My neighbor here has had to replace it four times. It's ridiculous," Sweeney said.

For Anand Melwani, a landlord, insurance ate the cost of fixing supply lines until recently. He fixed a leak in February, but by April, his building's basement was flooded again, and his claim was denied.

Residents are now trying to figure out what is causing the electrolysis problem and who should take responsibility.

Con Edison said it's not the problem starter, as it doesn't use direct current.

The energy company said it recently launched an investigation and pointed the finger at Verizon. Con Ed said it traced the source of stray electricity to Verizon equipment on a pole in Rosedale.

But Verizon said Con Ed's findings were flawed because it used fiber, not electricity, at that location.

Now the New York City Department of Environmental Protection said it is investigating and should have answers in a few months. After 7 On Your Side called the city's Office of the Comptroller, a representative said the city will conduct "a thorough examination."

Email 7OnYourSideNina@abc.com, or contact Nina on her Facebook page or tweet her at Twitter @7OnYourSideNY! You can also call the 7 On Your Side Hotline at 917-260-7697 or fill out the form below.
Report a correction or typo
Related topics:
home & gardenjamaica estatesrosedaleflushingqueensnew york cityverizoncon ed7 on your side
Copyright © 2022 WABC-TV. All Rights Reserved.
7 ON YOUR SIDE
How to get reimbursed for at-home COVID tests
7 On Your Side: Tips for ordering your free at-home COVID tests
Woman wrongfully fined $259K for neighbor's violations in NYC
7 On Your Side tips to dig out of credit card debt
TOP STORIES
Winter Storm Update: Tracking the nor'easter
Vigils tonight for fallen NYPD officers Rivera and Mora
Jacobi Medical Center shooting suspect arrested after sign-in
Long Island officer reunites with mom, baby he helped deliver
Supreme Court Justice Stephen Breyer to retire
25-year-old carpenter found fatally shot after NYC crash, dispute
Husband shares journey after losing wife in crash that killed Kobe
Show More
Kathryn Kates, 'Orange is the New Black' actress, dead at 73
After day of confusion, masks back in NY schools pending appeal
Scientists monitoring new omicron subvariant BA.2
AccuWeather: Cold calm before the storm
1 dead, 38 missing after boat capsizes near Florida; 1 survivor found
More TOP STORIES News