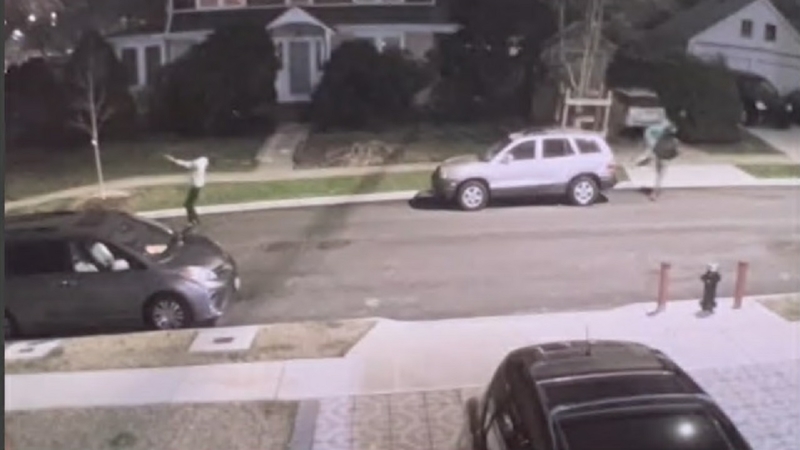 BAYSIDE, Queens (WABC) -- Guns were ablaze - but it was not a warzone, it was Bayside, Queens over the weekend.

The home on the corner of 38th Avenue and 209th Street was occupied by squatters for about two years now. They have out-of-state plates and some don't even live in New York, they were just renting out the place on Airbnb, but residents angry about last weekend's shooting gathered on the block to demand a solution.

"There's probably lots of violations in there. Shut this place down, that is what we're calling for," said Senator John Liu.

Joseph Carollo, the former owner showed up, but he says he sold the place to the bank four years ago, and the property has been in foreclosure ever since.

"I have nothing to do with these people here. Nor do I want them here, but I don't have a choice at this point," Carollo said.

The pandemic only slowed the foreclosure process down in the courts, but the squatters knew that, and were making money off of it.

The home is in poor shape, and inspectors from New York City Department of Buildings were there on Friday, but the DOB says they can't vacate the property unless there is imminent danger.

The bullets penetrated two cars on the block, one of them - including a child safety seat.

"It's ridiculous - if this occurred sometime during the day when they were putting the child in, God knows," said Bayside resident Stephen Markowski, "we pay our taxes, we want to make sure our families are secure and protected. Now ya gotta look over your shoulder and wonder what's going on."

On Friday afternoon, a spokesperson at Airbnb told Eyewitness News,

"We take this situation very seriously and have suspended the listing, and canceled reservations."

As for the bank that currently holds the mortgage, residents say there is not much help from them. In fact, they called after last weekend's shooting and were stunned by the response.

"This is the CEO, 'duck and cover,' that's what he told me," added Markowski.