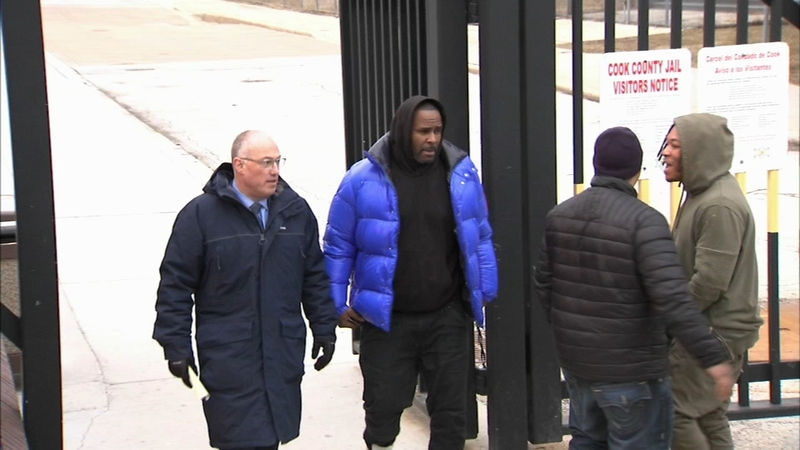 CHICAGO -- Valencia Love confirmed Tuesday that she is the woman who posted bail for R. Kelly, as shown on bond slips obtained by ABC News.

Love told ABC News over the phone: "It was his own money. I just posted bail for him. She added that R. Kelly is a "good friend of mine."

R. Kelly posted bond and was released from Cook County Jail Monday afternoon. Earlier he appeared in court in Chicago and his attorney entered a not guilty plea to sex abuse charges against the singer.

Security and fans fought back cameras as they tried to clear a space for Kelly as he left jail.

After three nights in lockup, Kelly's entourage picked up passengers and drove almost immediately to a popular River North McDonald's. There, he emerged in a tan hooded coat, ordered fast food, and sat and enjoyed it in public like any other customer on a Monday night.

He was last seen heading into a Gold Coast cigar bar.

Hours earlier, at his court appearance, Kelly wore an orange jumpsuit and held his hands behind his back during the proceedings. Kelly's case has been assigned to Judge Lawrence Flood and his next court date is scheduled for March 22.

RELATED: R. Kelly charged: A look back at key moments of the singer's life and career
EMBED More News Videos

Take a look back on the history of sex abuse allegations against singer R. Kelly.

Kelly is facing 10 counts of aggravated sexual abuse with four alleged victims including three underage girls. The Grammy-winning artist has sold more than 40 million albums in his career.

"Our position at this point is that Mr. Kelly has done nothing wrong," said Kelly's attorney, Steve Greenberg. "No one has showed us any evidence that he has done anything wrong."

Greenberg said Monday he is not worried about additional charges coming against his client, and has not seen anything that leads him to believe his client has done anything wrong.

R. Kelly turned himself in to Chicago police Friday night, and will remain in police custody at least until his bond hearing Saturday.

Attorney Gloria Allred pushed back against R. Kelly's lawyer's assertion that the women who have accused the R&B singer of sexually abusing them are lying.

Allred said at a news conference Monday in Los Angeles that she represents more than six women who say they were abused by Kelly.

One of them, Lizette Martinez, said at the news conference that she met Kelly at a shopping mall when she was 17 years old and that he abused her from 1995 until 1999.

When asked why she decided to come forward, Martinez said, "I'm a mom. I have a daughter. I felt like I had to be transparent and vocal about what happened to me to save others. I was hurt as a young girl. I don't want this to continue to happen, or to happen to anyone else."

Allred also said Kelly's accusers have been subjected to abuse by the singer's fans.

R. Kelly is expected to post bond Monday. He is also scheduled to appear in court Monday.

The landlord at Kelly's West Loop recording studio claims he owes more than $174,000 in back rent, and earlier this month a judge ordered him to pay $161,000 he owes in child support. Judge Flood said he does not have to pay the back child support before he posts bond.

Greenberg cited problems with getting money out of the bank over the weekend caused the delay in posting bond. He reiterated on Monday that child support payments owed in a civil case do not affect Kelly's ability to post bond.

While behind bars, Kelly is being isolated from the general population in the jail. Greenberg said his client is holding up well.

"No one wants to be in jail," Greenberg said. "He's strong."

Take a look back on the history of sex abuse allegations against singer R. Kelly.

Michael Avenatti, an attorney for some of the alleged victims, said he turned over more video evidence to prosecutors.

"The videotape depicts Mr. Kelly engaged in illegal sexual assault of a 14-year-old girl," Avenatti said. "It is approximately 55 minutes in length. The conduct in the tape can be described as nothing short of outrageous, illegal. It leaves no question as to Mr. Kelly's guilt."

Avenatti said Monday he has been made aware of a third tape showing Kelly sexually abuse a minor.

On Friday afternoon, Cook County State's Attorney Kim Foxx detailed the charges against Kelly. Three of the four victims were between the ages 13 and 17 when the alleged abuse occurred, with Kelly being more than five years older than the victims, Foxx said. The alleged abuse took place between September 1998 and January 2010. The indictment papers do not say where the alleged crimes took place.

In the indictment, the prosecution addresses the question of the statute of limitations, which is likely to be raised by the defense. It describes how prosecutors can charge Kelly under Illinois law even though the alleged crimes occurred as much as two decades ago.

The indictment said in at least one instance, the abuse of a minor occurred between 1998 and 1999 but that it clearly fell within the 20-year charging window allowed under Illinois law. The 20-year period only begins, it says, after a victim turns 18.

Foxx said aggravated criminal sexual abuse is a class 2 felony. If convicted, Kelly could face up to seven years in prison for each count. If a judge decides the sentences should be consecutive, he could be sentenced to up to 70 years in prison. Foxx said probation is an option.

City inspectors say singer R. Kelly has not complied with their order to clear what appear to be bedrooms in his near West Side studio space.