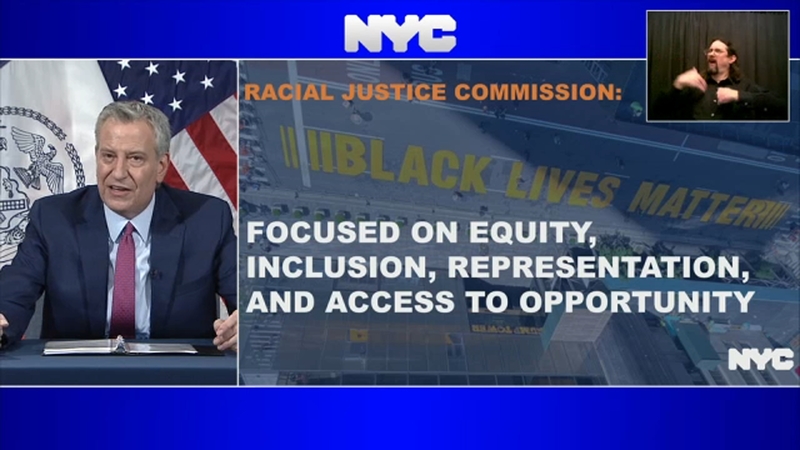 The mayor said it was time to do something "transformational, something unprecedented" to combat racism and focus on equity.

The commission will be focused on equity, inclusion, representation, and access to opportunity.

"We've never had a model for actually addressing structural racism, institutional racism, identifying it, acknowledging it, formally apologizing for it, weeding it out, eradicating it, making the policy changes, changing the laws, doing the things that will actually have a lasting impact," de Blasio said.
EMBED More News Videos

The commission will be focused on equity, inclusion, representation, and access to opportunity.

The mayor said that to change the historical trajectory, a vehicle for getting to the root causes for identifying structural and institutional racism is needed. He pointed to the commission as the way to make that happen.

The 12-member commission is tasked with finding where racism exists and what is needed to be done to eradicate it.

Mayor de Blasio said some changes will be achievable by policy, but others can only be achieved by laws, and that will mean changes to the city's constitutional charter.

The committee will examine the charter and determine what needs revision. The proposals will be "sent to the ballot for the people to decide on."

The mayor pointed to the Truth and Reconciliation Commission as the model he used to fashion the city's committee.

"This group will change the world," de Blasio said. "And I think they'll create a model that can be acted on, and borrowed, and utilized all over this country as part of our healing and our progress forward."