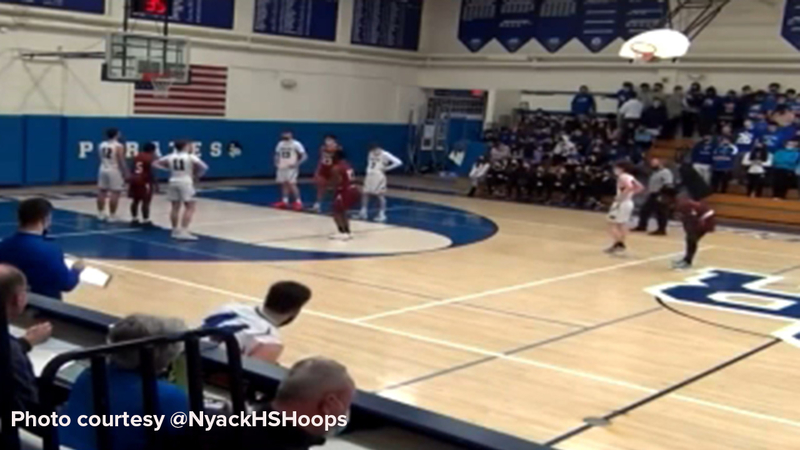 PEARL RIVER, Rockland County (WABC) -- A Rockland County community is outraged and school officials are speaking out after a racist incident at a high school basketball game.

It happened Wednesday night during a varsity game at Pearl River High School, which was hosting Nyack High School.

"The Nyack School District and Board of Education stand firmly and resolutely with our student athletes in the wake of the racist and reprehensible behavior displayed by members of the Pearl River community at Wednesday night's basketball game," Nyack Superintendent Eudes Budhai said. "We have asked the Pearl River School District for a full investigation and report, and have also asked Section 1 Athletics to review this situation with the safety and mental well-being of our athletes as a top priority. We are making counseling available to any Nyack students in need of support."

Player Kameron Kukielczak wasn't at the free throw line, but he heard the monkey noises being directed at a fellow Black teammate. It happened at least three different times during the game.

"I was kind of surprised," student Kameron Kukielczak said. "I wouldn't think anyone would want to do that during the game, especially to young kids."

"For me as a coach, it just felt like, this is not a good situation for our players to have to deal with during a high school varsity game," he said.

Budhai immediately reached out to have what he described as a difficult conversation with his Pearl River counterpart.

"I felt it was just reprehensible, racist comments, and the things that were occurring during a game where children are supposed to feel the safest," he said.

It turns out an investigation was already underway after a similar incident last week when Pearl River hosted Suffern High School. The noises came from the student section, though Superintendent Marco Pochintesta said those responsible have not yet been identified.

"We absolutely find this behavior deeply disturbing, harmful to all of us, and racist," he said.

Pochintesta acknowledged there have also been two instances of intolerance to LGBTQ students this year, and the district is reaching out to community groups to increase inclusion education, something Nyack's leaders say must be done.

"To see the divisiveness that's out in the society right now and that lack of sensitivity for a body of students to think this was something OK to do," Nyack School Board President Terence Rock said.

Budhai urged anyone identified as being involved in the racist behavior to attend an Undoing Racism Workshop convened by the People's Institute for Survival and Beyond or the Getting to the Root training provided by the Center for Safety and Change.

"This incident, especially disheartening during Black History Month, a time when we unite as a school community to celebrate the achievements of all Black Americans, reveals the need for our own Strategic Plan for Excellence Through Racial Equity and for ongoing work to dismantle systemic racism in schools throughout our county," he said. "We thank our community for their outpouring of support and reaffirm our commitment and efforts to achieve excellence through racial equity here in Nyack Public Schools. We hope these efforts will inspire others in Rockland County to join us. In our diversity and our unity, we remain Nyack-Strong."

Pochintesta penned a letter to the community, calling the incident "disturbing" and expressing his outrage.

"This behavior will not be tolerated under any circumstances, and the students involved will be addressed through the District's Code of Conduct," he wrote. "The actions of these individuals do not in any way represent the values and expectations of our school district or our community."

He said this and other recent incidents should serve as a message that everyone needs to participate in creating positive change.

"The Pearl River School District is responsible for part of this work, but we need the support of the entire school community," he wrote. "Parents can help by reinforcing with your children the importance of treating all people with respect and dignity. As a community, we must all encourage open dialogue with children about these topics and we must all provide the tools and modeling to help students create a culture in which this type of behavior is not acceptable."

He said the investigation is ongoing, and he plans to address the issues with the assistance of the community's resources.

"The type of racist and reprehensible behavior displayed during Wednesday night's high school basketball game between Pearl River and Nyack has no place in our community, and I condemn it in the strongest terms possible," he said. "As a former youth coach myself, it's particularly disturbing to see our young people subjected to type of racist abuse. While the actions of a few do not define the mindset of the many, it is up to our entire community to treat others with the respect we all deserve and speak out against any and all acts of intolerance."