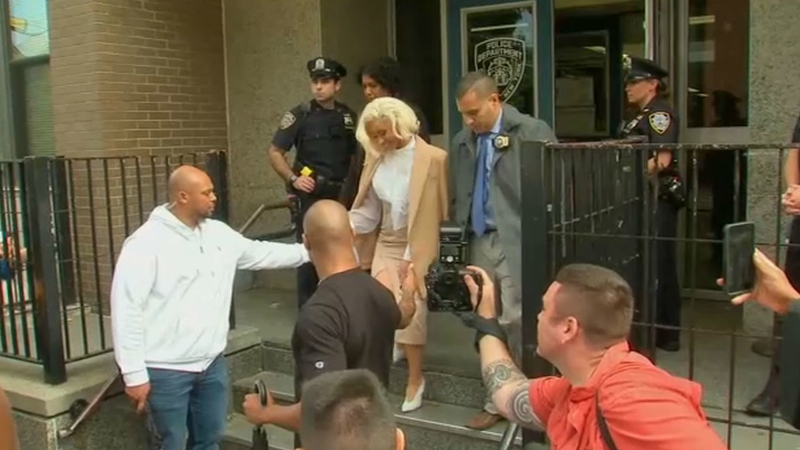 FLUSHING, Queens (WABC) -- Rapper Cardi B surrendered to police Monday morning to face charges in connection with an assault on two bartenders at a Queens strip club.

The 25-year-old, who became a mom in July, was charged with assault and reckless endangerment, both misdemeanors, in connection with the August 29 fight at Angels Strip Club in Flushing.

Cardi B received a desk appearance tickets to appear in court at a later date, tentatively scheduled for October 29.
EMBED More News Videos

She will face misdemeanor charges in connection with the Aug 29th fight at Angels Strip Club in Flushing.

Detectives are sorting out whether or not she was directly involved in the attack, which happened around 3 a.m., but it is alleged she threw an object that struck one of the bartenders, causing a laceration to the foot and bruising to her legs.

She is charged with assault for allegedly causing that injury, and reckless endangerment for allegedly throwing objects at both female bartenders, sisters identified as Jade and Baddie Gi.

Attorney Jeff Kern said outside the Queens police station that he's "aware of no evidence" that Cardi B "caused anybody any harm."

Cardi B smiled as she left the police station but did not comment.

Police say she and her entourage were present at the time of the dispute, during which chairs and bottles were thrown and the two bartenders were hit with debris. At least 10 people were said to be involved in the fracas, which may have been over a romantic dispute possibly involving Cardi B's husband, rapper Offset.

The two bartenders are now represented by attorney Joseph Tacopina, who issued the following statement:

"Cardi B ordered and committed violent assaults against my clients and is being called to justice for her crimes. Apparently, she thinks her celebrity status puts her above the law, since she has bragged to multiple people and on social media that she orchestrated these vicious attacks. But reality is setting in, as justice does not care whether her name is Cardi B or Carly B, and she will now answer for her crimes."

The incident occurred about three weeks after Cardi B and Nicki Minaj were involved in an altercation that got physical at a New York Fashion Week party and left Cardi B with a mark on her head.