Earth Day: 9-year-old from New Jersey saving the planet 1 battery at a time 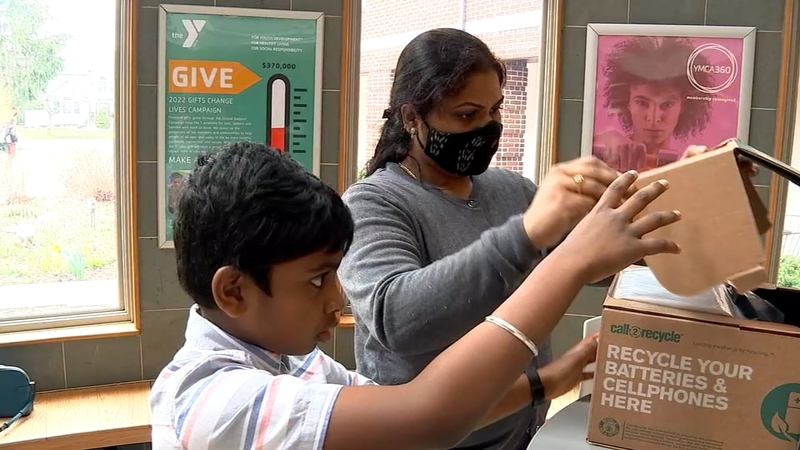 Earth Day: 9-year-old from NJ saving the planet 1 battery at a time

EDISON, New Jersey (WABC) -- A 9-year-old boy from New Jersey is saving the planet, one battery at a time.

They have been called "zombie batteries," disregarded by humans -- but in their afterlife, they rise from the dead and fuel disasters and have been linked to huge toxic fires.

Thanks to a group of mostly kids, used batteries can have a second life.

"The batteries can be used to make golf bags, copper, other batteries and many more items," activist Rayansh Boddu said.

Boddu became concerned about the health of the planet while watching news about fires involving lithium batteries. It inspired him to action.

"I was just doing some research about batteries," he said.

That led to discovery and unveiled his passion.

"I just love nature," he said. " I just want to save Mother Earth in whatever way I can. I just thought batteries, you know, how focused I am on batteries."

ALSO READ | Earth's forest cover could drop by half by 2100; NatGeo explores how humans can protect these trees

And with guidance from his parents, he joined Call2Recycle's Recycle My Battery program, which provides bins for people to dump their used batteries.

He gets permission to place the boxes in various high traffic businesses, even in places like the YMCA near his hometown of Edison.

So far, he's recycled some 20,000 batteries. But why is this important?

"A small drop in the ocean can make a difference in the world," he said.

He and others like him are making waves for future generations to enjoy.

"I'm just a small drop in the ocean," he said. "If more people get added to it, together we can make a huge difference."

His optimism is infectious, sparking thoughts of a better environmental future.

"It doesn't matter about how old you are," he said. "Your age is not important, but what you're trying do is important."

According to a report by Battery Solutions, Americans toss 3 billion batteries every year.

"It ends up going into the landfills and contaminating the water, air and land quality," Boddu said. "So whatever we are drinking or eating would be contaminated."

So it's really important to spread the message.

"Every Day is like the most important day for me, because you know, I really care about Mother Earth," he said. "And on Earth Day, it's so important for me to place many battery bins and spread awareness."

Is there a goal?

"Me and the whole team of Recycle My Battery are aiming to get that 500 billion batteries to zero," Boddu said.

And you can join. If you're 20 or younger, you can request a battery bin or help place the bins and finally spread the word.

"(My friends) are like, 'Oh my God, you're doing such an amazing job, maybe I could also join this campaign,'" Boddu said. "So maybe you're right, maybe I am an inspiration."