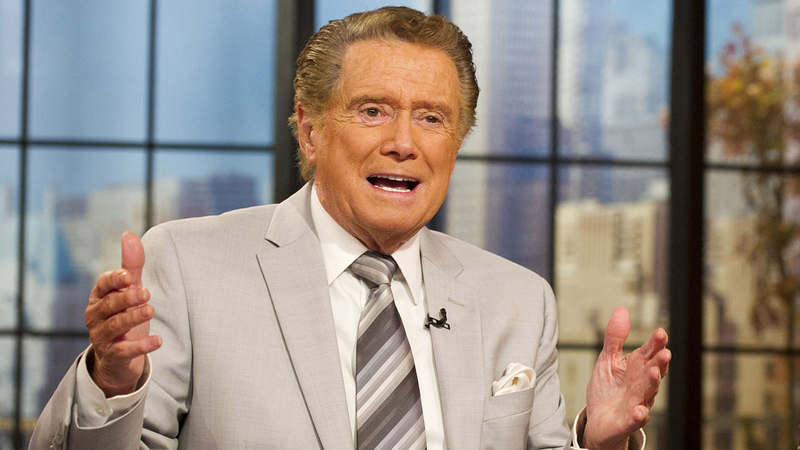 NEW YORK -- As the Guinness Book of World Record holder for the most broadcast hours logged by a TV personality, Regis Philbin's life and career have many chapters.

But his journey started from humble beginnings. After leaving the Navy, Philbin several odd jobs before landing his first on-air role as a fill-in sportscaster on a local Los Angeles TV station.

Here's a timeline of Regis's life and legacy:

1931: Regis Francis Xavier Philbin was born on August 25 and grew up in the New York borough of the Bronx.

1953: Philbin graduated from Notre Dame University and joined the Navy.

1955: Philbin talked his way into a meeting with the stationmaster at KCOP-TV in Los Angeles. He got a job parking cars, then progressed into work as a stagehand, courier, newswriter and producer of a sports telecast. When its sportscaster didn't show up one day, Philbin filled in.

1961: His first talk show, "The Regis Philbin Show," airs from KOGO-TV in San Diego to a national audience. The program of music and celebrity interviews was taped two weeks before each airing. It was canceled after four months.

1967: Philbin was hired as the announcer and sidekick to comic Joey Bishop on his network show. That's where he met his second wife, Joy, who was Bishop's assistant.

1982: Philbin moves back to New York and joined Garvey on WABC-TV's "The Morning Show."

1988: Philbin and Gifford's show becomes nationally syndicated and renamed "Live with Regis and Kathie Lee." Celebrities routinely stopped by Philbin's morning show, but its heart was in the first 15 minutes when he and Gifford bantered about the events of the day.

1993: Doctors performed an angioplasty to relieve a blocked artery. Later in life, at age 75, he underwent bypass surgery.

1999: He began hosting the ABC prime-time game show, "Who Wants to Be a Millionaire," briefly television's most popular show at the turn of the century. Philbin's question to contestants, "Is that your final answer?" became a national catchphrase.

2000: Gifford left her spot on "Live." After a tryout period for a replacement, then soap star Kelly Ripa (from "All My Children") filled the slot.

2011: After three decades, Philbin retired from his morning TV show. On Nov. 18, Gifford came back to bid him farewell on his last day on the show they had begun.