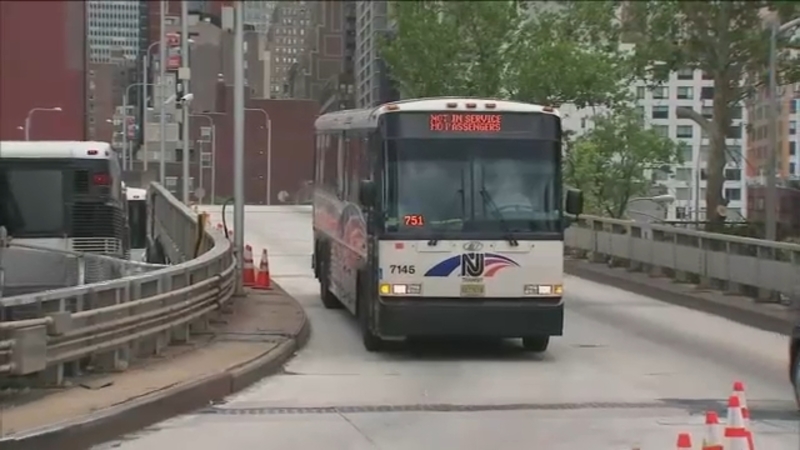 NEWARK, New Jersey (WABC) -- New Jersey's two senators were joined by state officials Monday to detail how they want to use $2 billion in COVID relief money to help stop transit cuts and save jobs.

After securing the money from the American Rescue Plan to keep New Jersey Transit running in the face of unprecedented revenue losses, Senators Bob Menendez and Cory Booker committed to fighting for more federal resources to help modernize New Jersey's aging transportation infrastructure and make it easier for commuters.

Senate Democrats are crafting legislation that aims to deliver the nation's largest single federal infrastructure investment in nearly a century.

President Biden recently unveiled his $2.3 trillion American Jobs Plan that calls for investing $85 billion in transit, $115 billion for highways and bridges, $80 billion for Amtrak, plus significant transportation investments in airports, seaports, electric vehicles, and hardening our infrastructure from floods and other natural disasters.

"The COVID-19 pandemic derailed mass transit budgets across the nation and here in New Jersey, and if Congress failed to pass the American Rescue Plan, workers and commuters would pay the price," Menendez said. "But the American Rescue Plan was just that, a rescue plan. It was not a long-term solution for our nation's outdated and crumbling infrastructure."

Menendez and Booker pledged to fight in Washington for additional federal infrastructure dollars to address New Jersey's transportation needs and help NJ TRANSIT meet the goals of its $17 billion, five-year capital plan, which include:
--Advancing the Gateway Project (including the Portal North and South Bridges and trans-Hudson rail tunnels)
--Extending the Hudson-Bergen Light Rail into Bergen County and the West Side of Jersey City
--Moving to a zero-emissions bus fleet
--Modernizing aging train stations and rail bridges, the Newark Light Rail and Camden River LINE
--Increasing rail capacity on several lines

"The coronavirus pandemic has had a crippling impact on nearly every aspect of our economy, including New Jersey's transportation networks," Booker said. "I was proud to join Senator Menendez in fighting to ensure the American Rescue Plan included robust federal investment in NJ Transit in order to help lay the groundwork for the economic recovery of our state while improving the quality of life for commuters. Our work is not done, however. We must continue to work on long-term solutions, including the Gateway Project, to address our region's infrastructure needs."

As a senior member of the Senate Banking, Housing and Urban Affairs Committee and the transit subcommittee, Menendez is pushing to give transit systems greater priority in federal transportation funding; to increase funding levels for the popular Capital Investment Grant program, the largest federal funding source for Gateway and other large-scale projects; to increase transit-oriented development investment to spur economic growth and improve the quality of life for residents; to improve transit worker safety; and to prioritize efforts to lower air pollution by reducing congestion and harmful emissions.

"Funding made available under the American Rescue Plan is critical to NJ Transit's ability to deliver public transit services to New Jerseyans who depend on it every day," Gutierrez-Scaccetti said. "The American Jobs Plan provides the all-important long term infrastructure investment that is critical to New Jersey's entire transportation system. We are grateful to Senators Menendez and Booker for their tireless efforts fighting for infrastructure funding. It is the 1-2 punch transportation needs."

Menendez led the fight in Congress to include transit funding in any COVID relief package. Ultimately, the $1.9 trillion American Rescue Plan included $30.5 billion for transit agencies, with approximately $2 billion expected to be allocated to NJ Transit plus another $77.8 million to replace the Portal North Bridge, a key component of the Gateway Project that includes building a new trans-Hudson rail tunnel.

According to NJ Transit, the federal funding plugs a projected 13% budget gap for FY2023, ensures the agency's full operation without any service or personnel cuts through FY2024, and allows it to pursue capital plans to modernize the transit system and improve travel for commuters.

"I want to thank Senators Menendez and Booker for all their work, and the work of the entire New Jersey Congressional Delegation, to secure this desperately needed funding for NJ Transit, and for being such strong advocates for our agency and for our entire state," Corbett said. "In addition to the service and staffing impacts on the operating side, there would likely have been impacts to the advancement of our ambitious, $17 billion, five-year Capital Plan and all the essential projects within it. Bottom line, without these funds, the consequences for NJ Transit and our customers would have been dire, at a time when more and more customers will begin returning to our system, and frequent and reliable service will be more critical than ever."