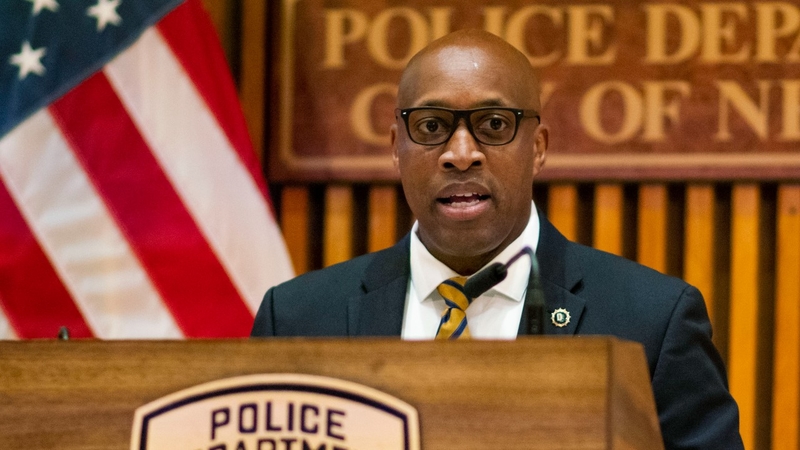 NEW YORK CITY (WABC) -- County Executive Steve Bellone announced his pick to be Suffolk's next police commissioner Tuesday, and it's a familiar face for the New York area.

Rodney Harrison, the NYPD's highest-ranking uniformed officer and the first person to ever rise from cadet to chief of the nation's largest police department, was tapped for the job.

"I'm honored and proud to welcome Rodney Harrison to be the next commissioner of this policing family," Bellone said.

The 52-year-old Harrison announced his retirement from the NYPD last month after spending 30 years with the department. He will become the first African American to serve in the role in a department looking to reform, diversify and lean into his experience to tackle crimes of particular concern like MS-13 and the opioid crisis.

"New York City is different when it comes to issues compared to Suffolk County, but me working in every single borough, like the county executive stated, is going to allow me to adjust," Harrison said.

Harrison's nomination comes as earlier this month, Bellone outlined a comprehensive police reform plan which includes body cameras and it comes one day after the 10-year mark of the discovery of the remains of Shannan Gilbert.

Congrats to Rodney Harrison, nominated to be @SCPDHq’s next Police Commissioner.

Wishing him nothing but success in his next chapter of service to the public. pic.twitter.com/x35zXorZHQ

Born and raised in New York City, he grew up in Rochdale Village in Jamaica, Queens, where, at the urging of his father, he came to view a career in law enforcement as an opportunity to create positive change for residents across New York City.

During his 30-year career, Harrison served as the department's first African American chief of detectives, was shot at while working undercover investigating drug crimes in the 1990s, held assignments in each of the city's five boroughs, and had the distinction of being the official in charge of monitoring wind speeds to decide whether the giant balloons of the Macy's Thanksgiving Day Parade could fly in various years.

In recent years, he was instrumental in implementing the department's "neighborhood policing" strategy, which pushes officers out of their patrol cars and onto the streets so they can build bonds with residents.

Harrison was named chief of department in February. He's the third African American in that post.

"Rodney has been not only a trusted advisor, and friend, but exactly the kind of innovative leader our city and our department has needed in these challenging times," NYPD Commissioner Dermot Shea said in a statement last month. "He has performed in every rank - from patrol officer, to undercover officer displaying tremendous valor, to Chief of Department - with knowledge, skill, integrity, and a great passion for our continuing mission to always protect life and property and to build lasting relationships with those we serve. We will miss him, but we wish him well."

Harrison is also part of a policing family. His wife is a retired NYPD lieutenant, and two of their daughters are now patrolling the city's streets.