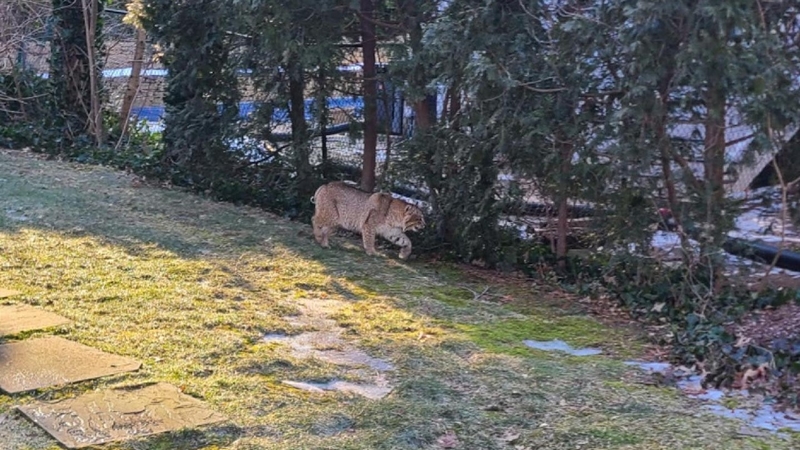 RYE BROOK, New York (WABC) -- Residents in the village of Rye Brook are on high alert after multiple bobcat sightings.

The Rye Brook Police Department posted a message on Facebook on Sunday, warning people about the big cats roaming the area.

They say bobcats have been spotted near Rockinghorse Trail and Country Ridge Drive.

Officers are now patrolling those areas, but residents are warned to close their garage doors. They say the animals may go into open garages to get warm.

Josh Stern saw a bobcat outside his home where he lives with his wife, two young kids and his little dog.

"We're just making sure the fence is always closed and watching out, the kids are not outside without any supervision at this point," Stern said.

Police think the animals might live in the nearby golf course and got a little off track.

DEC Wildlife Biologist Mandy Watson said that while bobcats were once rare around New York and were once restricted to the Adirondack, Catskill and Taconic mountains, today their population is doing very well and they can be found throughout the entire state -- with the exception of New York City and Long Island.

"Although bobcats are a very elusive species and rarely seen, it is not unusual for us to hear about sightings in Westchester County," Watson said. "They do occasionally show up in suburban areas, where food is often abundant. With the amount of greenspace surrounding the Rye Brook area, it is not surprising that there seems to be a bobcat hanging around."

Watson says bobcat attacks on humans are very rare, however it is still important to exercise caution. If you see a bobcat, do not approach it and make sure to supervise small pets, especially at night.

Always walk dogs on a leash and anyone who has poultry or other livestock should make sure they are in a secured, predator-resistant area.
You can scare away a bobcat by yelling or making other loud noises. These tips will also help prevent conflicts with coyotes.

"They range between 8 and 25 pounds, they look a lot bigger in the pictures," said NYS Wildlife Rehabilitator Megan Apicelli. "People are zooming in and you know they are freaking out because they are not used to seeing these animals."

Experts say do not put out food for the bobcat or other wildlife. Attracting them to an area with food will increase the chance of conflict.

"It's really terrifying because you know they are ambush predators, they can take out things really quickly, and you don't know how to protect yourself and your animals," said Rye Brook resident Bruce Depaola.