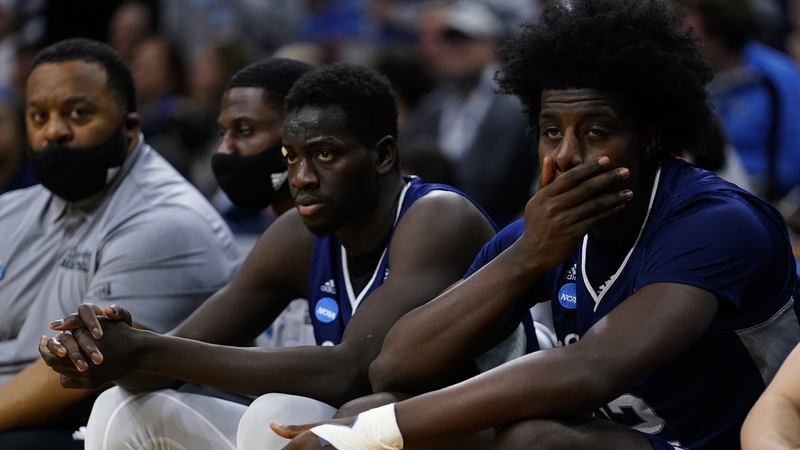 JERSEY CITY, New Jersey (WABC) -- The dance is over for the Saint Peter's Peacocks after a 69-49 loss to North Carolina.

The Saint Peter's Peacocks were the story of the NCAA Tournament. That's because they are the first 15 seed to reach the Elite Eight.

The Peacocks, whose 10-game win streak ended, moved the ball well and got plenty of good looks over the first 10 minutes. Some shots went halfway down and rimmed out. Others bounced twice on the iron but wouldn't fall. They trailed 21-7 after missing their first six shots, and 16 of their first 19.

Late in the first half, Daryl Banks III swooped in for what looked like a windmill jam. It got rejected - by the front of the rim. It made the Peacocks 5 for 27 on the night, and when Bacot dunked on the next possession, North Carolina led 36-15.

The weekend before, North Carolina had taken a 25-point lead against Baylor only to see it all melt away before pulling the game out in overtime. The turning point there came when Brady Manek got ejected for throwing an inadvertent elbow. Manek finished this game on the sideline, too - watching garbage time from the bench after scoring 19 points.

It was an emotional evening for Davis, who replaced Roy Williams, the coach who took the Tar Heels to five Final Fours over 18 years. Now the 51-year-old Davis joins the likes of Ray Meyer, Steve Fisher and Denny Crum as rookies to reach the sport's biggest stage.

Were it not for Saint Peter's, maybe North Carolina would be the underdog story of this tournament. Way back when, in 1985, another 8 seed shocked the world. It was Rollie Massimino's 1985 Villanova team.