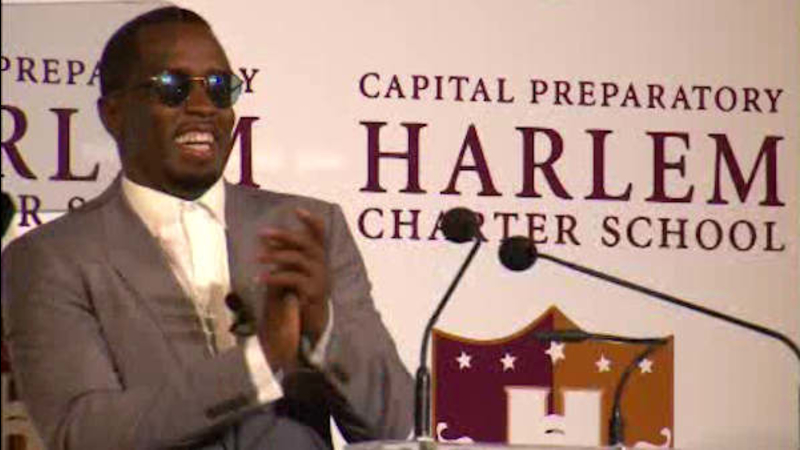 HARLEM, Manhattan (WABC) -- Sean "Diddy" Combs has his own record label and clothing line, and now, he has his own charter school.

The musician and mogul has opened a school in Harlem, in the neighborhood where he grew up and where he is now trying to improve education.

It felt a lot more like a concert than the first day of school, as ecstatic students greeted their benefactor.

"I'm excited to be here," he said. "This is the start of something important."

It is something Combs began working on five years ago, and the Capital Preparatory Harlem Charter School is modeled after a similar school in Connecticut that was founded by noted educator Steve Perry.

"I will tell you, I spent a considerable amount of time saying are you sure you want to do this," Perry said. "Because once we go public with this thing, people are going to question both of us."

But Combs wasn't satisfied with his success in the music and business world, and he was convinced a school was the best way to help children in the neighborhood. Capital Prep Harlem now sits at East 104th Street and will eventually host grades six through 12.

The 160 sixth- and seventh-graders this year will grow by a grade until its first class graduates in 2023.

Combs said when he looked into the faces of the kids, he saw himself. And he wants them to see their own futures through Capital Prep Harlem.

"If I have anything to do with it, they're going to have a fair playing field," he said. "And they're going to be the future leaders of our country."
Related topics:
educationnew york cityharlem (central)educationcharter schoolsean combs
Copyright © 2022 WABC-TV. All Rights Reserved.
TOP STORIES
AccuWeather LIVE: Snow turns into heavy rainfall
Mix of snow, heavy rain, wind hits Tri-State
Mass funeral held for Bronx fire victims
Woman killed after man pushes her in front of subway train
FBI identifies hostage-taker at Texas synagogue
Catch first full moon of 2022 Monday night
Pilot credited for miraculous crash landing released from hospital
Show More
7th grader dies after overdosing on fentanyl at school in Conn.
After Biden's first year, the virus and disunity rage on
Expect more worrisome COVID variants after omicron, scientists say
Tsunami advisory lifted for US after volcano eruption
UK detains 2 teens in connection to Texas synagogue hostage incident
More TOP STORIES News