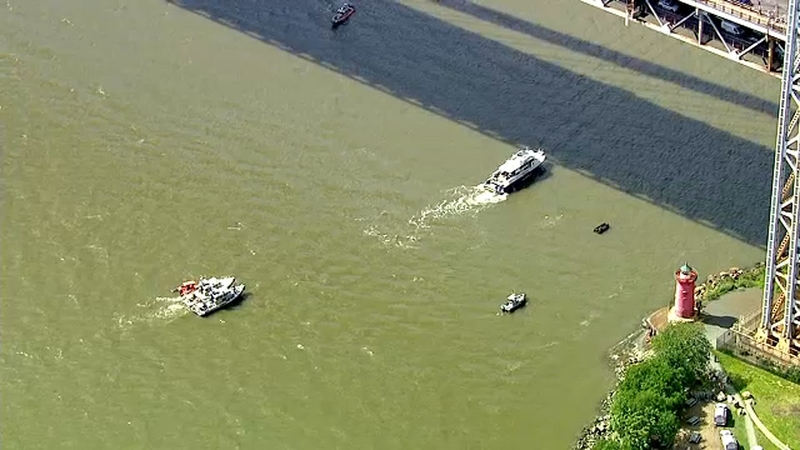 Search called off for missing swimmer in Hudson River.

FORT LEE, New Jersey (WABC) -- The search continues Saturday for the swimmer who went missing while he was competing in a swim in the Hudson River near the George Washington Bridge.

It is not clear exactly where the man went under.

Police also have not released the identity of the swimmer, but The University of North Carolina School of Medicine released a statement identifying the swimmer as Dr. Charles Van Der Horst, a retired professor who worked in the Division of Infectious Diseases.

"The UNC School of medicine is shocked and saddened at the news Dr. Charles Van Der Horst has been reported as missing following a multi-day swimming race in New York's Hudson River. Our thoughts are with Dr. Van Der Horst's family at this time," the statement read.

The New York City Police Department says the search for the swimmer resumed Saturday morning after being suspended late Friday. The Coast Guard is now calling it a "recovery."

The swim has seven stages. Friday was stage six -- 15.7 miles from the Tappan Zee Bridge to the George Washington Bridge.

"The family of Charles Van Der Horst of Chapel Hill, NC is deeply saddened to confirm the loss of our beloved Charlie. He was participating in several stages of the 8 Bridges Hudson River Swim when he went under at the finish of Stage 6.

Charlie exemplified living life to its fullest. He put all of his passion and zest into everything he did, from his love of his family, friends and community, to his swimming to his work on social justice and in the medical field. At this time we ask that you respect our wishes for privacy as we mourn this tragic loss."