April 16, 2021, would have been Selena Quintanilla's 50th birthday.
KABC
By Eric Resendiz 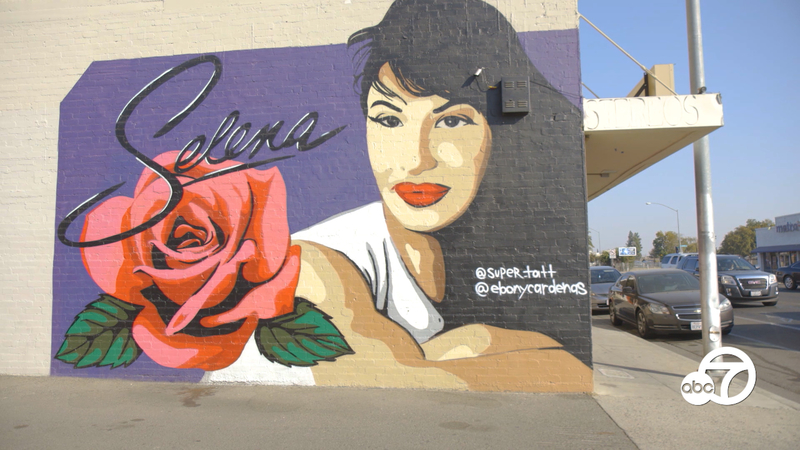 LOS ANGELES -- It's been more than 25 years since Selena Quintanilla, the Queen of Tejano music, was tragically killed. But in the hearts and minds of so many, she lives on. And murals are a very public way to honor her life and legacy.

Among the artists who've paid tribute is Los Angeles based Levi Ponce.

In 1995, Selena was just 23 years old when she died. Friday would have been her 50th birthday.

"For me Selena is a very iconic idol for women, for Mexican Americans, Chicano culture, her influence in fashion and music," said Shiori.

Shiori partnered with Danial Paniagua, a Stockton muralist, to add a Selena mural in Stockton.

"She was just an inspiration for us as people as a community. And we just felt that we needed a mural like that, that would pay tribute to her in a way here in Stockton, California because we've never had a mural of her," said Paniagua.

And each mural is unique. Many artists said their inspiration was drawn from something about Selena and her experience that resonated within them.

"It's in black and white as a sort of... it's in the past right," said Ponce about his mural in Los Angeles. "But everything around her is in full color just like all of the joy around her and all of the joy she radiated from that smile."

Whether it was her success as a Mexican American, her music, fashion, or her love for fans, murals celebrate everything Selena was and continues to be, because, well, as her fans have said, 'anything for Selenas.'

Where Selena Quintanilla-Perez murals can be found across California

The mural at Plaza De La Raza has been up since 2013. In 2014, it became home to the #SelenaFanGathering in Los Angeles where fans from all over celebrate Selena Quintanilla-Perez.

Eloy Torrez painted 13 entertainers for a mural in 2002 on the east wall of the Hollywood High School Auditorium. One of those depicted in Selena.

On the side of Ray and Roy's Market, Isabel Peinado's mural painted in 2017 features 16 women, including Selena. Peinado explains on her website that she made the mural to "remind everyone that we are a country of immigrants, that's what makes us diverse and beautiful, like the 16 influential women she painted in her mural."

Soul on Ice, a sports and streetwear store in L.A., has a mural that can be seen when the store is open, featuring Selena in a Dodgers hat.

As part of the promotion for the Netflix series "Selena: The Series," artist Emilia Cruz created the mural that faces Hope St. In an Instagram post announcing its installation, Cruz shared that she found Selena as an inspiration. "It was important to be able to see someone in the mainstream media who felt so familiar," she said. "I still remember that I played her cassette nonstop in my little pink boombox."

Artist Tetris Wai installed a mural on the side of Novacane Bar in Huntington Park in 2021. It can be seen in the parking lot and depicts Selena with the artist's name in big letters next to her.

Meza-Dierks's mural shows various musical artists like Tupac, Aaliyah and Selena in front of a galaxy of purples and blues. They were introduced to Valley Blvd in 2021.

Another one of Zermeño Jr.'s murals of Selena can be found in Culver City, facing Girard Ave. It depicts Selena singing in her iconic purple jumpsuit.

Nick Santos' mural at El Hair Studio can be found in the parking lot of the studio, depicting Selena in a color-blocked illustration.

Located at the Americana at Brand in Glendale, Cintron's mural of Selena is painted on the side of a utility box. She paints the singer in a cartoon style, dancing with a mic and white rose.

On the side of Discount Market, a mural of Selena sitting at a table is shown facing E. Market St.