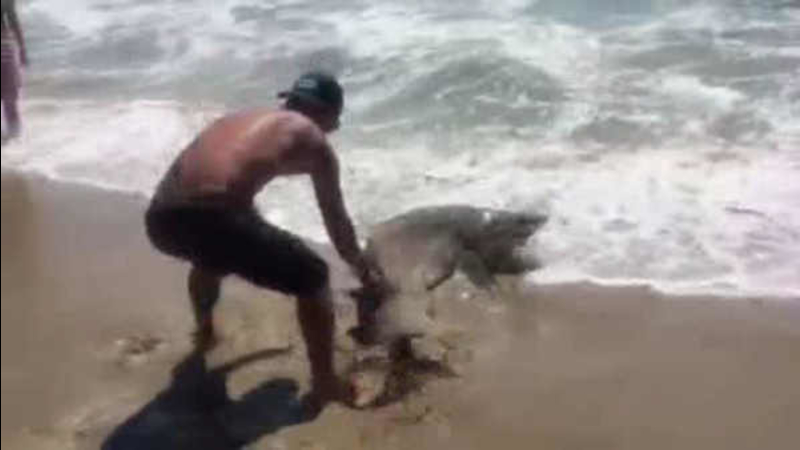 LONG BEACH ISLAND, New Jersey (WABC) -- Surfcasting along area beaches is a long-standing tradition, with fishermen expecting to pull in fluke or bluefish.

But one young fisherman on Long Beach Island pulled in the surprise of his life: a shark.

Joe Mandile coached his son Gianni as the 13-year-old reeled in the big catch.

The father thought it was a stingray, but his son knew it was something bigger.

"He saw it first," said Mandile. "As the wave curled, he saw the silhouette of the shark in the wave and he said, 'Dad it's big, it's a big shark!'"

And was he ever right: a 200 pound shark, to be exact. The teen says he could tell right away it was a very large fish by the way it pulled on the line.

After all, he's been fishing since he was three years old.

"I didn't expect to catch something that big," said Gianni. "Because other people have caught those types of fish but usually at night, so I wasn't expecting to catch it in the middle of the day."

Dad managed to wrangle the shark up on the beach. A friend removed the hook and the picture taking began, a moment certainly worthy of the family photo album.

"To set a hook in a fish and reel it in is an accomplishment, but to do something at this size, this age and that big," said Mandile.

"All my friends, I've caught bigger fish than them, so it's kind of good," said Gianni.

It is not considered unusual to catch sharks in the area, but it is rare to catch one this big.

After they snapped some pictures, they set the shark free back into the ocean. The Mandile family credo is 'catch and release', so that's what they did.