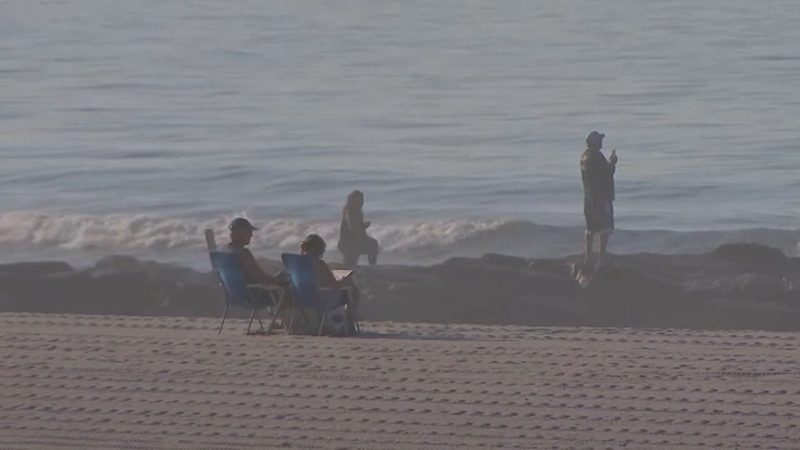 HEMPSTEAD, Nassau County (WABC) -- Some Long Island beaches are again closed to swimming after more shark sightings Wednesday, this as a lifeguard is describing a terrifying scene as a shark was spotted acting aggressive just feet from swimmers Tuesday.

There have been at least nine sightings in the waters off Nassau County since Monday, after sharks were spotted off the coast of Nickerson Beach, off Point Lookout, and off Tobay Beach in Oyster Bay on Wednesday.

"Yesterday at approximately 3:15 p.m., we witnessed a big shark breach the surface about five feet into the swimming area, directly off shore in front of the lifeguard chair," East Atlantic Beach lifeguard Connor Byrne said. "The lifeguards immediately responded, called all the patrons out of the water. And at that time, we called the ocean base down at the Town of Hempstead to alert them of the sighting that we saw. Immediately afterwards, patrons did not want to go back into the water. I have to thank the Town of Hempstead for teaching all of us how to identify sharks and how to react quickly and most effectively."

Hempstead kept their beaches closed to swimming for the day following the sightings.

"We saw a large dark gray and white object on the surface of the water making a huge splash that no other fish could make, and it was sitting on the surface of the water for probably about 30 seconds thrashing around maybe going after a fish," Byrne said. "At that point, several of the patrons, most of the lifeguards could all identify the fin and tell that it was clearly a shark and was being aggressive. Once again, it was five feet directly offshore from the swimming area with people around, so no one wanted to go back in the water."

Nassau County announced it will have "enhanced helicopter patrols" over the shoreline as well as intensified marine ocean patrols in order to help alert beachgoers and swimmers of the presence of sharks.

"We've seen sharks before out here in previous years, but I've never seen a shark so close to shore," Byrne said. "The depth was probably only about knee to waste deep, so it was definitely scary...People were screaming and yelling a little bit, but the lifeguards did a great job of getting everyone out and making sure everyone was safe."

With that said, Nassau County Police Commissioner Patrick Ryder said it's possible that sharks may not be there at the exact point when they are looking, so swimmers should always listen to the lifeguards.

Even when open, swimming is limited to waist level at some of Nassau's South Shore beaches, including Hempstead's beaches, which opened at 10 a.m. Jones Beach had fully reopened to swimming, but lifeguards remain on high alert.

Meanwhile, swimmers spotted a shark off Field 6 at Jones Beach around 3 p.m. Tuesday, but it could not be confirmed by lifeguards and the water was reopened an hour later.
EMBED More News Videos

More shark sightings in the waters off Long Island beaches have once again halted swimming Tuesday, as new safety measures and restrictions were put into place.

Long Beach also closed their beaches to swimming at that time, but they reopened after about an hour after lifeguards on personal watercraft also did not see any sharks.

"We want you to enjoy yourselves," Clavin said. "We know this is a very hot period, but we want you to be safe...and if we see or hear of any other sightings, we will take the precautions necessary."