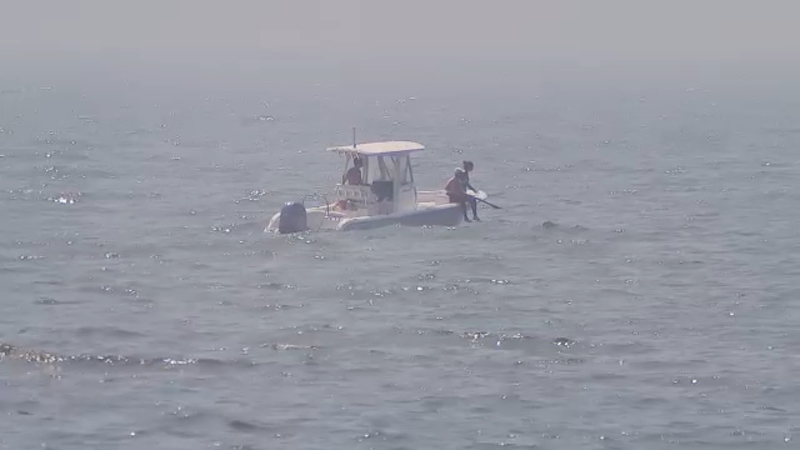 TOBAY BEACH, Long Island (WABC) -- As 17 sharks have been spotted off the south shore of Nassau County over the last two weeks, officials are working to tag the species and track their movement.

Swimmers were pulled from Point Lookout and Nickerson Beach Tuesday after a shark was spotted at around 3:15 p.m.

The 7-foot shark breached the water and was spotted by a lifeguard and a half dozen swimmers.

On Tobay Beach on Wednesday, there weren't any new sightings, but there were visits from shark tracers.

Researchers along the coast are using hydrophones to monitor shark and fish activity. The team from Stonybrook University's School of Marine and Atmospheric Sciences is focusing on the great South Bay.

The work is in the spirit of conservation and over 100 species have been tagged so far.

"As the oceans change and humans continue to generate chemical pollution it's important to understand how the levels of contaminants in the sharks bodies are changing and how the animals are reacting to these environmental stressors," said PhD student Lisa Crawford.

And while it may seems like there have been a lot of shark sightings recently, including two at Tobay Beach, the scientists say the warmer water this time of year is a draw for sharks.

And there's nothing unusual about that.

The Oyster Bay town supervisor took the opportunity to remind swimmers to use caution.

"Make no mistake, sharks in our water are extremely dangerous, the threat of someone being injured or killed or bleeding to death is very, very real," Joseph Saladino said.

There have been about a dozen attacks in New York waters since the 1860s.