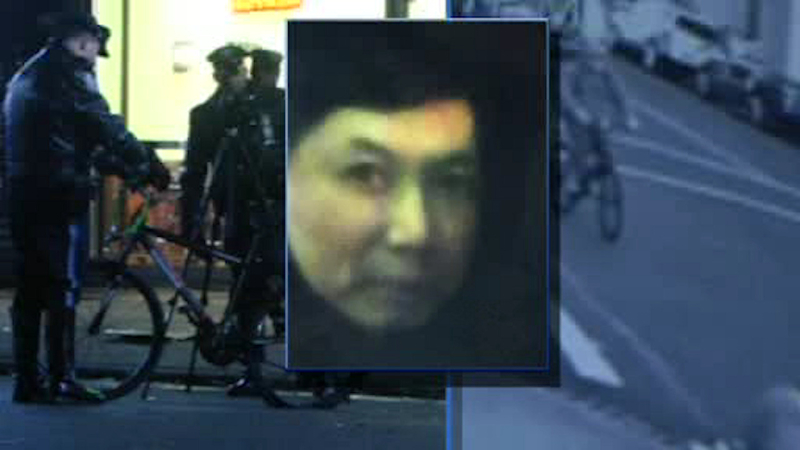 SHEEPSHEAD BAY, Brooklyn (WABC) -- Police arrested the driver of a truck that struck and killed a man on a bike in Brooklyn Tuesday, devastating a family.

31-year-old Junior J. Hicks of Queens was arrested and charged with leaving the scene of a motor vehicle accident with death involved.

Even in her darkest hour, and with unbelievable grace, Yanping was thanking those who tried to help her father, Can Reng Ma, a man who wanted only the best for his family.

In the surveillance video, you can see Can Reng on his bike on Avenue U, right next to a Ryder Truck.

Just as the two cross over E. 9th Street, for some reason, the truck hits the 54-year-old killing him.

The truck kept going, at least one person chased after it, but the vehicle made a right on E. 8th Street and disappeared just after 5 Tuesday night.

"I've never seen anything like that before," said Matin Vacrat, a witness.

Police searched all day for the truck and it's driver before finally making an arrest.

Can Reng was doing what he did every day, making the roughly two mile journey home by bike.

Kimmie Kwok worked side by side with the victim at GC Lumber Supply, and can't get it out of her mind, what would turn out to be her friends last moments alive.

"He left here with a smile, really nice," Kwok said.

Around the warehouse, Can Reng was known for his work ethic, generosity, a humble soul who adored his wife, daughter, and teenage son.

"We do love him, we feel so sorry about him," Kwok said.

Just seven years ago, they came here to the U.S. from China. Cam Reng wanted a better life for his family. Yanping has this to say to the person who just shattered their American dream: "I really want to ask him why he did that to my father and left my father there, just call the police, 911; maybe my father could be saved."