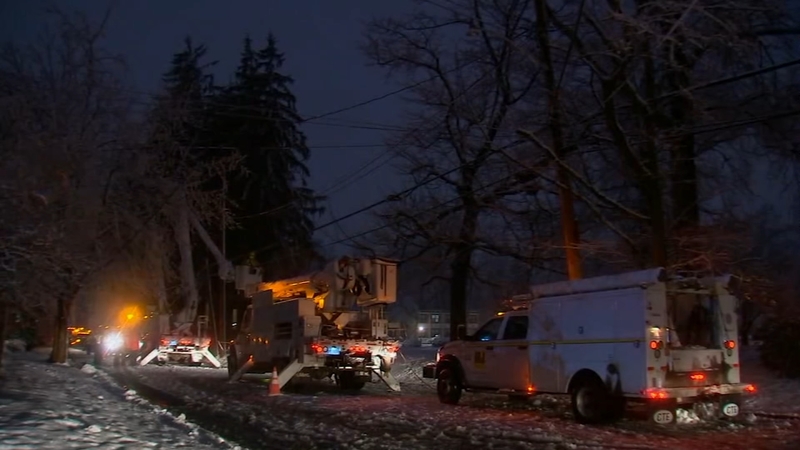 NEW YORK (WABC) -- Residents across the New York area were digging out from as much as 2 feet of wet, heavy snow Thursday, while utilities dealt with downed trees and electric lines that snarled traffic and left hundreds of thousands without power in the Northeast after two strong nor'easters in less than a week, all with possibility of another storm in the wings.

The lower Hudson Valley received the brunt of the snowfall, with residents in Westchester County still reeling from the previous storm. More than 25,000 customers were without power Thursday evening. In Suffern, an 88-year-old woman died after being hit by a falling tree in her yard.

On Lockwood Avenue in Yonkers, the wind blew down a tree during the snowstorm which downed several utility poles, transformers, wires and tree branches onto the street and cars. The street has been taped off for crews to repair the damage.

Amy Freeze posted more from Yonkers on her Instagram (@AmyFreeze7) and Snapchat accounts as well as Facebook.

Among the hard-hit areas was a neighborhood in Parisippany, New Jersey.

Josh Einiger reports on the storm damage in Morris County.

"Even Hurricane Sandy a few years ago, even though we were out of power for a long time didn't do this much destruction," said resident Peter Cutler.

He was borrowing just enough juice from a neighbor's generator Thursday night to power a light and a refrigerator, but had no heat.

"I've got two sweatshirts and a bathrobe on trying to stay warm," he said.

The first nor'easter hit six days ago, and power outages were prevalent in Westchester County and across New Jersey even before the second storm arrived. Downed trees blocked the restoration efforts on Thursday.

Meteorologist Amy Freeze reports on how Yonkers is dealing with the aftermath of the storm.

Westchester County Executive George Latimer called for the resignation of the presidents of Con Edison and NYSEG due to what he called their inadequate response to the first storm.

New Jersey Gov. Phil Murphy says he's ordering a review of how the state's utilities handled their response to the two recent winter storms. "Our frustration, deep frustration turned to anger on my part, at the uneven preparedness and the uneven response," said Murphy.

One NJ town is still facing power outages the day after the storm.

Murphy said Thursday at a news conference that a state of emergency remains in effect. About 145,000 residents were still without power Thursday night, down from 350,000 at the height of the outages.

Anthony Johnson reports on the nor'easter aftermath in New Jersey.

One company from South Carolina sent 400 bucket trucks through the night to get Morris County and North Jersey back in business.

In Cortlandt, more than 700 residents remained without power as the snow piled up. Among them was Teressa Davidoski, whose family relied on a generator for power as they wondered about the severity of the new storm.

"We are going to walk down the street if we have to and stay with neighbors there but we can't drive anywhere," she said.

Hours after the nor'easter left the area, trees and power lines continued to come down, creating dangerous situations for residents and drivers. Eyewitness News captured one incident on camera in Ho-Ho-Kus, New Jersey that sent workers scrambling after a tree branch broke, snapped a power line and exploded manhole covers.

An Eyewitness News camera was rolling when it happened in Ho-Ho-Kus, New Jersey