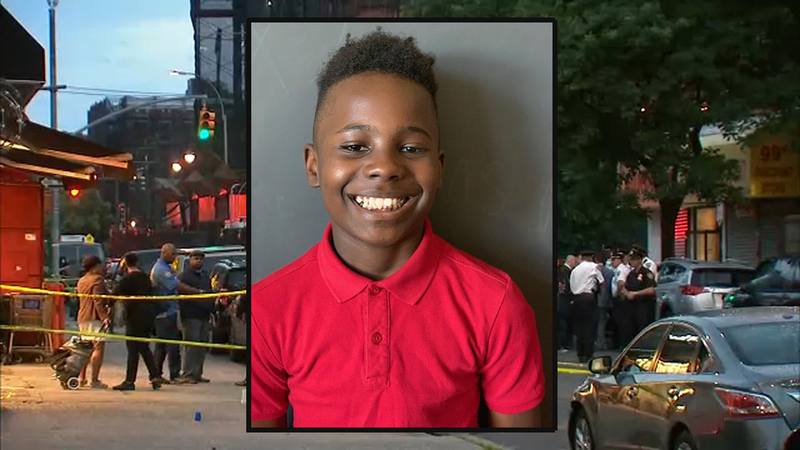 CROWN HEIGHTS, Brooklyn (WABC) -- The grandmother of an 11-year-old boy struck by a stray bullet in Brooklyn last week says her grandson still has no feeling from the waist down and keeps asking why he can't feel his legs.

Jayden Grant and a 31-year-old man were wounded last Thursday when a gunman opened fire around 7 p.m. on Schenectady Avenue in Crown Heights, apparently trying to shoot another person from 50 feet away but missing his intended target.

Bessie Watson-Grant says her grandson remains in the ICU with a gunshot wound to the chest, with the bullet stuck in the soft tissue in his back.

The bullet did hit his spine, but Watson-Grant says the swelling prevents doctors from determining long-term damage at this point.

"Right now, he has no lower body sensation," Watson-Grant said. "He said, 'Grandma, why can't I feel my legs."

Still, she says he is alert and talking, and that his 10-year-old brother -- who was with him but not hurt in the shooting -- is traumatized by the incident.

The boys' father was in a nearby barbershop at the time and ran outside to find his son lying on the sidewalk. Watson-Grant says he is dealing with guilt that he wasn't there to protect his son.

"He has some guilt because he felt he couldn't protect his son at the moment," she said. "And even Jayden said, 'Daddy, it's not your fault.'"

She says she is outraged that the suspect just opened fire, saying if he was such a tough guy, he should have directly approached the person who he was after. But instead, he cut down an innocent child.

"No child should be hurt, no child," she said. "But to know my grandchild was cut down and such a young boy and might have life long traumatic injuries behind this silly act, it makes you angry."

Grant was supposed to graduate fifth grade on Friday, which is why he was at the location getting a hair cut.

His school, New Bridges Elementary in Brooklyn, has started a GoFundMe for Jayden.

The 31-year-old man was shot in the left knee.