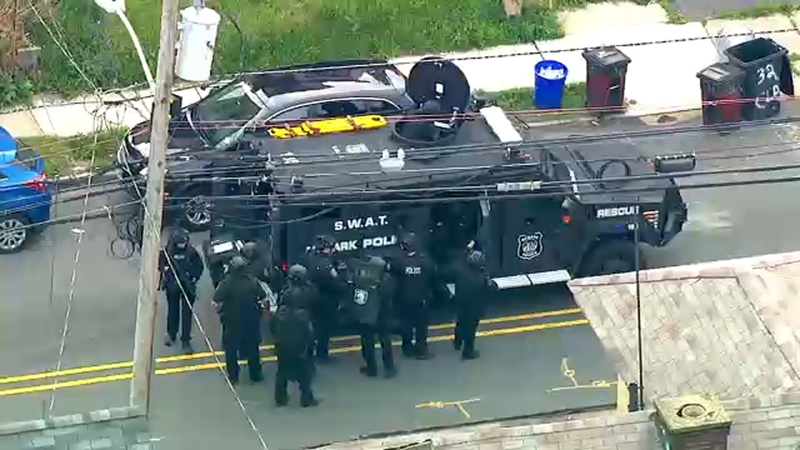 Suspect in custody after spending more than a day barricadedin Newark

NEWARK, New Jersey (WABC) -- A suspect was taken into custody following a more than 30-hour-long standoff at a home in Newark that started Thursday morning and lasted well into Friday.

Officers had tried to execute a narcotics arrest warrant at the home on Clinton Place around 6 a.m. when gunfire rang out, prompting the barricade situation.

Law enforcement went in and took the suspect, identified as 42-year-old Hassan Grimsley, down around 1 p.m. Friday.

Authorities say he shot at the entering officers, who returned fire. Grimsley was wounded and was taken to University Hospital in unknown condition.

The woman was shot in the face by a stray bullet that came through the window of her Brooklyn apartment.

As the events were unfolding, at least eight people were relocated either with other family members or at hotels.

"I felt like I was in Iraq," witness Michael Ellison said. "Helmets, trucks, all of this going on, it's crazy."

The search warrants were being executed as part of an ongoing narcotics investigation that began in May.

For more than 31 hours, law enforcement from various agencies were in constant communications with Grimsley, urging him to surrender.

In addition to law enforcement, mental health professionals, friends, family members and neighbors tried to convince the suspect, who had numerous guns, to come out.

None of the officers were injured, and no civilians were hurt.

"I am confident that everything possible was done to bring this situation to a non-fatal conclusion,'' Acting Essex County Prosecutor Theodore Stephens said. "This was done despite the stated wishes of the suspect that the police kill him because he was not going back to jail."

Grimsley spent 10 years in prison after he was convicted on narcotics and weapons charges. He was facing those charges once again.

He remains at the hospital, and charges are pending.