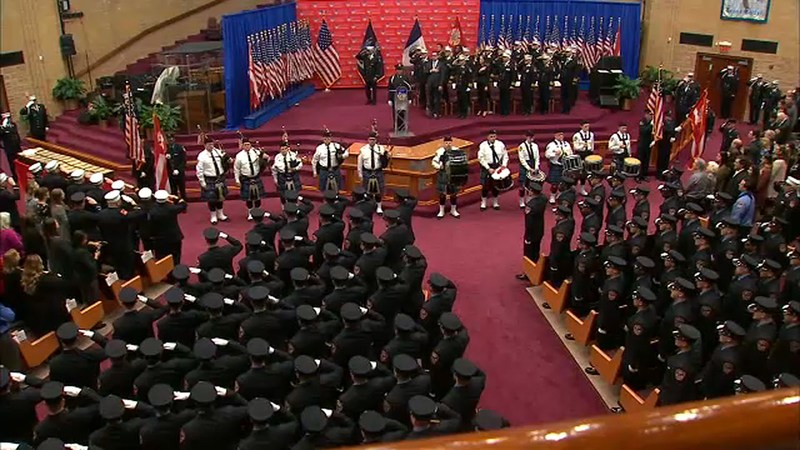 JAMAICA, Queens (WABC) -- A diverse group of New York City firefighters officially joined the ranks of the FDNY at a graduation ceremony in Queens Friday morning.

FDNY Commissioner Daniel Nigro presided over the ceremony at The Greater Allen A.M.E Cathedral in Jamaica.

The class of 291 probationary firefighters includes the second largest group of female firefighters in the city's history, and nearly half of the class is made up of people of color.

Over that span, the class was extensively trained in all aspects of their job as firefighters, including fire suppression and medical response, hazardous materials, collapse and confined space rescue training, auto extrication, building inspections and procedures for engine and ladder operations.

The 15 women who walked across the front of the cathedral are the largest group of females to become firefighters since 1982, when the very first group of women joined the FDNY.

"This diverse group includes the second largest group of female firefighters to ever graduate from the Fire Academy in a single class," Nigro said. "With more women and people of color in each new class of firefighters, we continue to demonstrate that this job is available to every man and woman looking to make a difference as members of New York City's Bravest."

"I am super proud, and I feel like I can set an example for younger girls as well who want to become firefighters, and want to do anything that's male-dominated," said probationary firefighter Chris Arnaud.

Probationary Firefighter Laura Savastano says it was cool having so many students in the class with her.

"We really are a family, we're all sisters now," she added.

The probationary firefighters will be assigned to firehouses throughout the city, where they will gain field experience under the guidance of senior firefighters and officers.