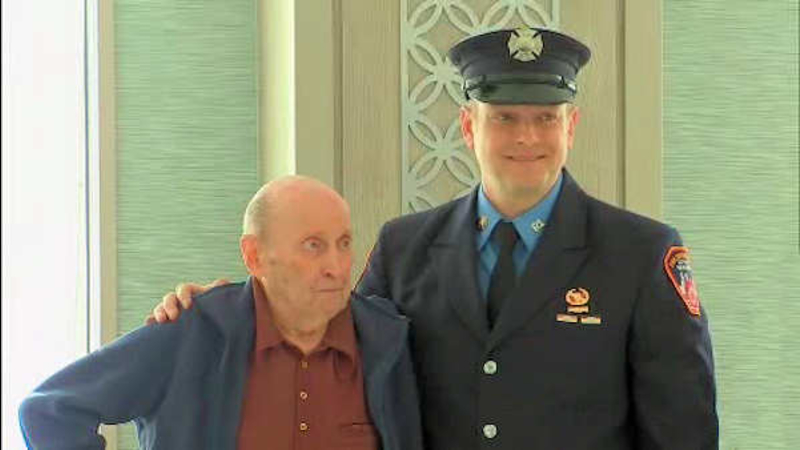 Firefighter re-united with man he saved

UPPER EAST SIDE, Manhattan (WABC) -- Dramatic video captured the harrowing rescue of an elderly man who was lowered by firefighters from the top floor of a walk-up building during a fire on the Upper East Side.

On Thursday, that man was reunited with the FDNY heroes who saved his life.

Four months after the daring rescue, Duffy met the man who helped bring him down to safety after fire engulfed his fifth-floor apartment.

That angel was firefighter James Lee, who knew exactly what to do as those flames drew dangerously close.

"I had to grab him out and just held onto him," he said. "Because he was calm and did what I told him, it was a very successful operation."

Duffy said staying calm was the biggest lesson he learned, and they may not have made it down, especially after learning the rope they were being lowered on was on fire.

"We didn't know it was on fire, luckily, but the guys on the roof were aware," Lee said. "They saw it, and they expedited us getting down to the ground safely."

The rope completely burned through moments after Duffy and Lee hit the ground.

The event Thursday served not only as a reunion, but also an important workshop for fire safety awareness. It was held at the Upper East Side Rehabilitation and Nursing Center, where Duffy recovered from his injuries.

"If you take your time, listen to what you are doing, pay attention to the firefighters, you can all come out pretty safely," Duffy said.

And Duffy isn't taking anything for granted, especially not Lee or the other men who risked it all to save him.

"He's been on the earth for many years, and hopefully for many more after that night," Lee said.
Related topics:
societynew york cityupper east sidefdnyrescuefirefirefighters
Copyright © 2021 WABC-TV. All Rights Reserved.
More Videos
From CNN Newsource affiliates
TOP STORIES