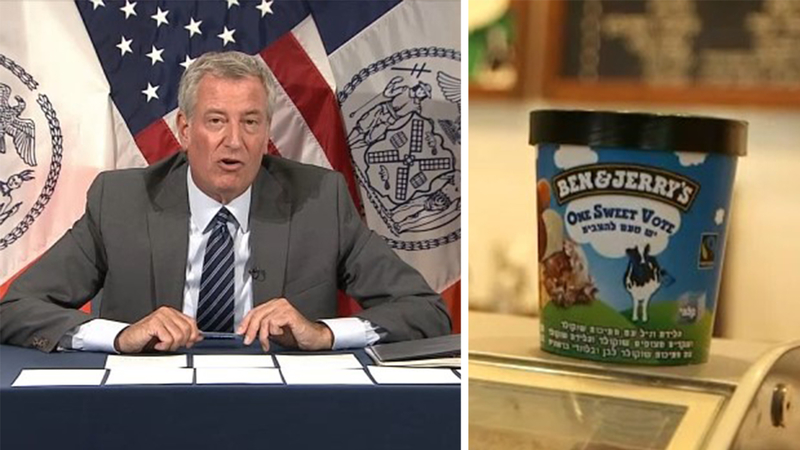 NEW YORK CITY (WABC) -- Mayor Bill de Blasio says he will boycott Ben & Jerry's, at least for a while, after the company announced it will no longer sell its ice cream in occupied Palestinian territories.

The Vermont-based company says doing business in those areas is inconsistent with its values.

Ben & Jerry’s will end sales of our ice cream in the Occupied Palestinian Territory. Read our full statement: https://t.co/2mGWYGN4GA pic.twitter.com/kFeu7aXOf3

The socially conscious brand has come under scrutiny for its relationships in Israel as tensions in the region have flared up.

De Blasio said on Tuesday he's met Ben Cohen and Jerry Greenfield in the past and thinks they're good people, but in this case, he believes they're making a mistake.

Tensions over the conflict in the Middle East boiled over to Times Square, where Israeli and Palestinian protestors clashed following the announcment of a cease-fire.

"You cannot have peace if you undermine the economic reality and create division," de Blasio said. "I just believe it's the absolute wrong approach and I don't think Ben & Jerry's should be doing that."

He says its decision will have serious consequences for the company, and its parent company Unilever.