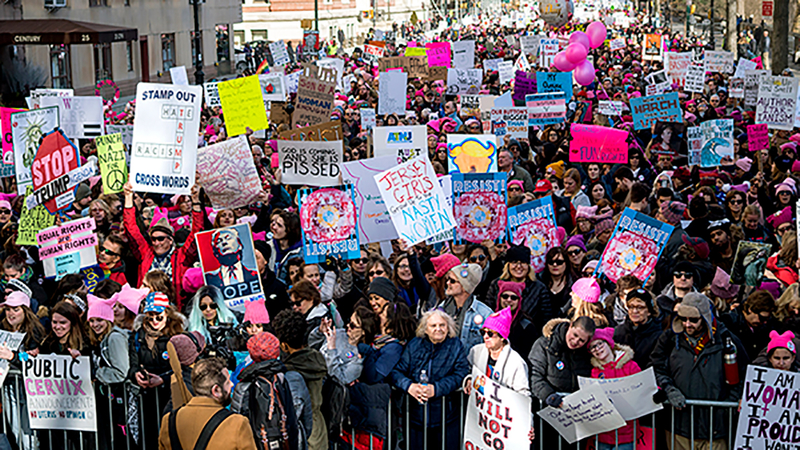 UPPER WEST SIDE, Manhattan (WABC) -- Hundreds of thousands of people took to the streets of New York City Saturday in a rally and march for women's rights on the one-year anniversary of President Donald Trump's inauguration.

The march was one of an estimated 250 women's marches planned for Saturday and Sunday around the world.

Bennett defeated Republican incumbent John Carman, who had mocked the 2017 women's march in Washington, D.C. with a Facebook post asking whether the women would be home in time to cook dinner.

Organizers say they are marching for gender equality and because basic rights for women, immigrants and others are under attack.

By Saturday morning at least 85,000 marchers were confirmed in New York City but organizers knew the final number would be far higher.

Last year 750,000 people took part in the New York City march, the largest in the country.

"It's so easy to become complacent and hide behind an iPhone or behind a computer and not join with your fellow people in exercising your right to demonstrate and exercising your rights in general," said event organizer Sarah Steinhardt. "It gave me a real sense of enthusiasm and that's why I joined the march again."

Among the goals of this year's march are getting more Democrats to run for public office and bolstering voter registration.

"Power at the polls," said a sign held by Cathy Muldoon, 52, a high school librarian from Dallas, Pennsylvania, who brought her two teenage daughters.

She said this year's action is set against the backdrop of Trump's presidency, which "turned out to be as scary as we thought it would be; I've not seen any checks and balances, everything is moving toward the right, and we have a president who seems to have no decency."

The march started near the southwest corner of Central Park before heading down Sixth Avenue to 43rd Street.

Police organized the elbow-to-elbow protesters behind metal barriers along the park, guiding them for their walk downtown.

Eyewitness News reporter A.J. Ross was at the scene:

Across the globe, people hit the streets on the anniversary of Trump's inauguration, marching against his policies and in support of the #MeToo movement against sexual assault and harassment.

In Palm Beach, a group of women wearing red cloaks and white hats like the characters in the book and TV show "The Handmaid's Tale" marched in formation, their heads bowed.

Elsewhere around the U.S., people congregated in Chicago; Houston; Richmond, Virginia; and Rhode Island. In Los Angeles, organizers predicted thousands of people, including state officials and celebrities, would march to City Hall.

Take a look at various women's marches happening across the country.