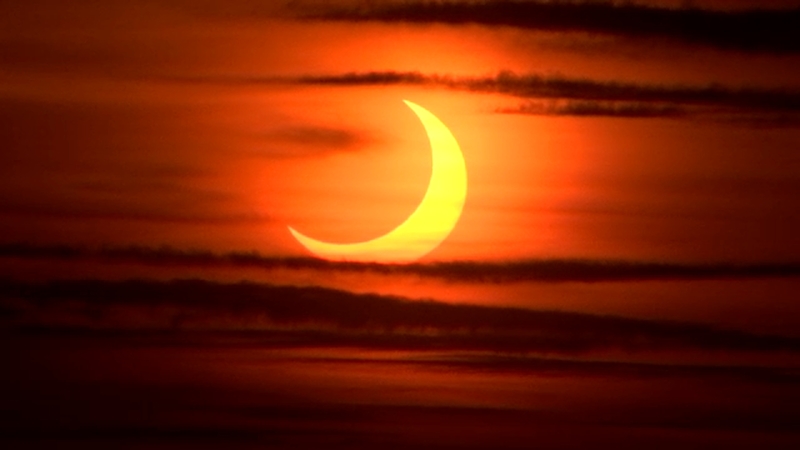 NEW YORK -- For the first time since 2017, Americans could watch a solar eclipse from their backyards!

Early Thursday morning, the moon blocked the sun and cast a shadow on Earth.

As the first solar eclipse since 2017 took place over Chicago Thursday morning, video shows an airplane fly over the eclipse.

People in parts of Canada, Greenland, and northern Russia saw the "ring of fire," or annular solar eclipse. Since the moon was too far away from the Earth, it did not entirely block out the sun, creating the illusion of "a dark disk on top of a larger, bright disk" in the sky, according to NASA.

This path of totality is so narrow that it is estimated only 20,000 people live in that path.

What you need to know about the solar eclipse on June 10, 2021, according to AccuWeather.

Sub-arctic skygazers were still in for a treat. Those in the northeast U.S., eastern Canada, northern Asia and northern Europe experienced a partial eclipse.

This means the moon only partially obscured the sunlight, as if it had taken a bite out of the sun, according to NASA. In some U.S. locations during the eclipse, the sun looked like a crescent but didn't have the "ring of fire" effect.

Unlike last month's lunar eclipse that dazzled the West Coast, this celestial phenomenon was visible in the U.S. along parts of the southeast, northeast, Midwest and northern Alaska. The eclipse occured before, during, and shortly after sunrise, according to NASA.

The eclipse started at 4:12 a.m. ET and ended at 9:11 a.m. ET in the northeastern U.S. The time of maximum eclipse varies by location, according to the Farmer's Almanac.

The eclipse visible from Chicago obscured 82% of the sun at its peak -- but only the tail end of the eclipse took place after the 5:15 a.m. sunrise.

Astronomers have emphasized that while it's safe to view this eclipse, do so only by using eye protection such as "eclipse glasses" or a solar filter.