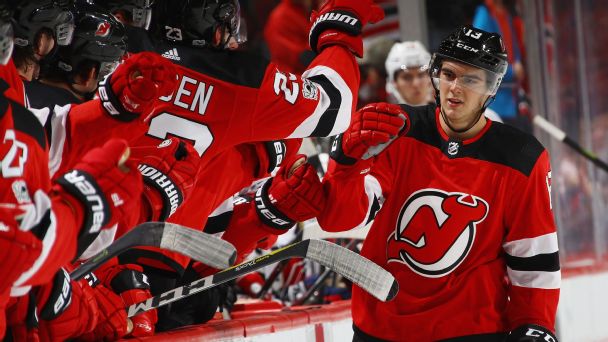 Biggest changes: After finishing with the worst record in the East, the Devils have nowhere to go but up. How high they can go and how long it will take them could depend on a gifted 18-year-old Swiss forward who fortuitously fell into their laps. By winning the draft lottery and taking Nico Hischier with the first pick in June, the Devils took their first step toward respectability. Since 2007, every No. 1 draft pick has played the following season in the NHL -- and Hischier will be the next. The playmaking center scored a nifty backhand goal in his first preseason game for the Devils and took a handful of shifts on a top line with Taylor Hall and Kyle Palmieri, giving fans a sneak peek at the immediate future. The Devils also made notable upgrades on the right side, trading for Marcus Johansson, who is coming off a career-high 24 goals and 58 points with the Washington Capitals, and signing Drew Stafford, who is looking to rebound from an eight-goal season with the Boston Bruins and Winnipeg Jets. They also got bigger down the middle with the signing of 6-foot-6, 244-pound center Brian Boyle, who was recently diagnosed with chronic myeloid leukemia and faces an uncertain future. On the back end, the Devils added 6-foot-3, 210-pounder Mirco Mueller, who is expected to replace Jon Merrill, who was taken by the Vegas Golden Knights in the expansion draft.

Case for: The hype around Hischier pales in comparison to that around previous top picks Connor McDavid (48 points in 45 games as a rookie) and Auston Matthews (69 points in 82 games last season), each of whom led their teams to the postseason within two years. If Hischier can find early chemistry with Hall (20 goals, 53 points) and Palmieri (26 goals, 53 points), it could trickle down to a much-improved group of forwards. Johansson, who is a better passer than finisher, should help a power play that finished 22nd last season, and if Boyle is healthy enough to play through or following treatments, he could help improve the Devils' penalty kill, which ranked 23rd. The Devils could also have two-way center Travis Zajac, who underwent surgery to repair a torn left pectoral muscle in mid-August, in the lineup by midseason. But for the Devils to take one step out of the cellar and begin their climb toward playoff contention, it's absolutely essential that goaltender Cory Schneider bonds with new goalie coach Roland Melanson and bounces back from a dreadful 2016-17 season in which he went 20-27-11 with a 2.82 goals-against average and .908 save percentage.

Case against: There is a reason the Devils ended last season with the worst record in the East and have been playoff no-shows for five straight years. They ranked last in the East in goals per game (2.20) and second to last in goals allowed (2.94). The problem lies on the blue line, where 34-year-old Andy Greene has been forced to carry a unit that has Ben Lovejoy miscast as a top-four defender. John Moore, Damon Severson, Dalton Prout, Will Butcher and Michael Kapla don't exactly strike fear in the hearts of opposing forwards, who spent last season feasting on Schneider and Keith Kinkaid, and probably will do so again this season. That's likely not what the Devils had in mind when they signed Schneider to a seven-year, $42 million contract two summers ago. Not having Zajac for the first half of the season is really going to hurt here as well.

Trade bait: The Devils don't have the organizational depth to trade for a player who can help right away, but if they're several points out of a playoff spot in late February, look for veterans Moore, Prout, Stafford and Lovejoy to be dangled in an attempt to land more picks and prospects.

Goalie situation rating: 5. It was difficult to tell whether Schneider's poor showing last season was his own doing or the result of an inferior team that allowed 31.4 shots a game, ranking 20th in the NHL. Either way, the Devils are hoping a reunion with Melanson, who coached Schneider in Vancouver, will reignite the 31-year-old goaltender. Melanson replaces Chris Terreri, who takes on a similar role with the New York Islanders. Kinkaid is also looking to improve on a season in which he went 8-13-3 with a 2.64 GAA and .916 save percentage.

Scout's take: "Getting the first-overall pick with a guy who should be able to play right away in the league and trading for Johansson was big for them. But to me, the biggest issue may be the hiring of their goaltending coach and how he and Schneider coexist together. From what I see right now, I would say they're not going to make the playoffs."