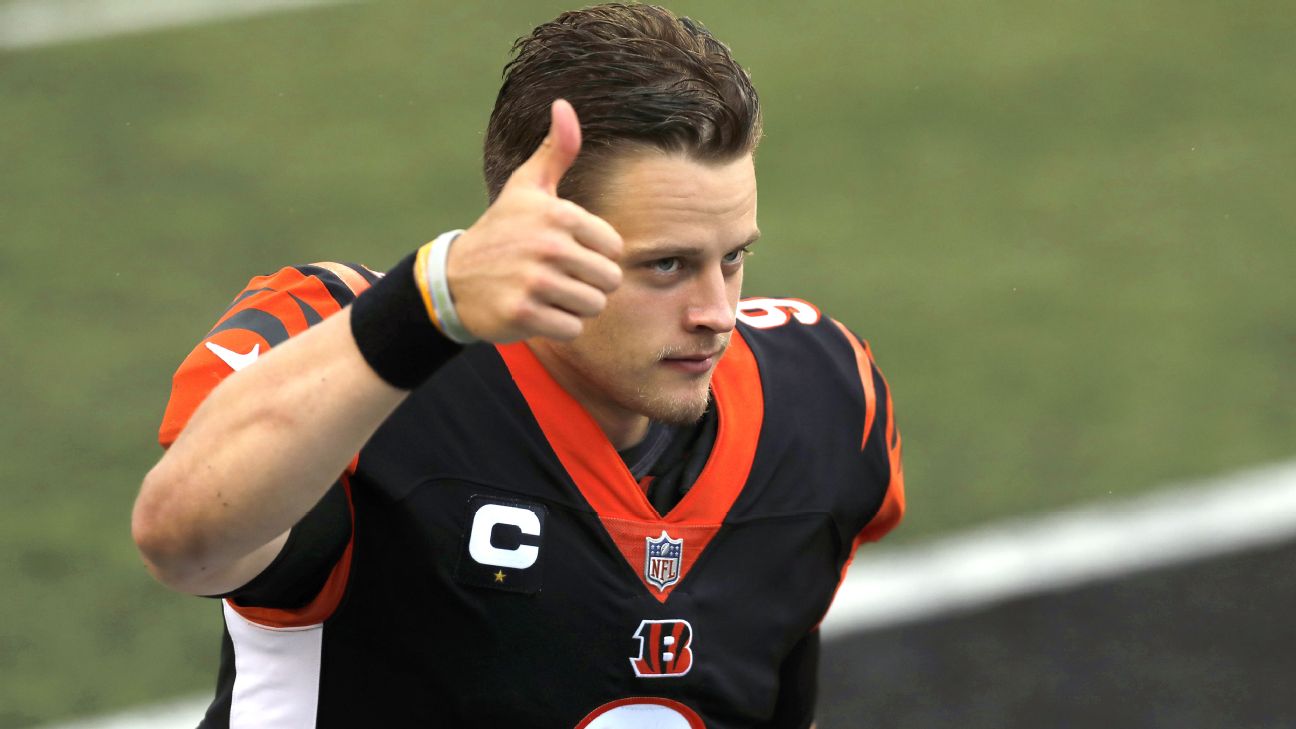 Four weeks into the 2020 NFL seasonand a scoring splurge can certainly be seen among the league's best rookies. In our first rookie rankings of the season, nine of the top 10 play on the offensive side of the ball -- and the top of April's first-round draft board is heartily represented as well.

Six ESPN writers and analysts -- Matt Bowen, Mike Clay, Mina Kimes, Kevin Seifert, Field Yates and myself -- ranked our top 10 rookies to this point in the season. We tabulated the results, using Heisman-type scaling for each ranking, which gave us an overall list. Then, I looked at two first-years who have seen their stock rise over the past four weeks, and two more whose stock has declined. I also provided a few additional notes on the class. Finally, ESPN Stats & Information's Seth Walder named an under-the-radar rookie to keep an eye on.


Eight first-round picks from this past April made the cut, including three of the draft's top six picks. Let's take the plunge into the first edition of the 2020 rookie rankings, starting with the guy who was the No. 1 pick six months ago.

Other notes | Under the radar

Burrow already has carved out a small slice of NFL history as the first rookie quarterback to throw for at least 300 yards in three consecutive games. Peyton Manning, for example, started every game as a rookie and had four 300-yard passing games for the season, and none on consecutive weeks. Burrow's 1,121 yards passing put him at 10th in the league as well. However, the Bengals need to care for the franchise guy much better, given Burrow has been sacked 15 times. Only the Texans' Deshaun Watson has been dropped more after four games (16).

After finishing with 26 and 44 receiving yards in Weeks 1 and 2, respectively, Jefferson has since gone for 175 and 103 in back-to-back games, averaging at least 25 yards per catch in each of those games. He has consistently shown in the early going he can beat man coverage even when opposing defensive backs try to get physical with him.

Just ask the Broncos how versatile Winfield is. In the Buccaneers' Week 3 win in Denver, Winfield had six tackles, a sack, another quarterback hurry and knocked down a pass. He has played all but one snap for the Buccaneers' defense through four games, and Tampa Bay defensive coordinator Todd Bowles has already found a significant role for him in the team's blitz packages.

Becton played every snap in the first two games of the season but left the Week 3 game against the Colts with a shoulder injury and did not start Week 4 against the Broncos (he entered and then left the game after just 17 plays). But he has been the most consistent pass-protector in a wobbly offensive line for an offense that is tied for last in the league in yards per game (278.0) and ranks 31st in scoring (16.3 points per game).

Herbert made a surprise Week 2 start when Tyrod Taylor suffered a punctured lung when getting a pregame pain injection and has since thrown for at least 290 yards in three consecutive games. His 8.7 yards per attempt is tied for fourth best in the league, and he has managed the pocket well enough to have been sacked just six times in those three starts.

Young suffered a groin injury in Week 3 -- he played 13 snaps before leaving the game -- and did not play in Week 4. But the first 108 snaps he played in Weeks 1-2 were exactly what Washington had hoped for when they drafted him second overall. He has made an impact both in the pass rush and as a run-defender.

The Cowboys have five players with at least 24 targets over the season's first four weeks, yet Lamb has been able to carve out his spot. He's third on the team in targets (29) and has had at least 59 yards receiving in each of his four games, with his first two touchdowns of the season coming in Week 4 against the Browns.

Among the league's rookies, Wirfs has the second-best run block win rate, according to ESPN Stats & Information, and has been a reliable pass-protector. He has already faced the likes of the Saints' Cameron Jordan, the Chargers' Joey Bosa and the Broncos' Bradley Chubb in his first four games while playing 100% of the Bucs' offensive snaps.

Edwards-Helaire certainly fits what the Chiefs want and need in a high-volume running back. He has 85 touches in four games, with a 138-yard rushing game in the season opener against the Texans to go with a 70-yard receiving game in Week 3 against the Ravens. He's averaging just over 5 yards per touch and should continue to flourish in an offense that forces defenses to divide their attention on each and every snap.

Robinson already had more receptions in four NFL games (14) than he did in two of his four seasons at Illinois State. He has averaged 111.5 yards from scrimmage over the season's first four weeks, is eighth in the league in rushing and has caught all but one of his passing-game targets.

Onwenu has already played at right tackle, left guard and right guard for the Patriots. The sixth-round pick -- 182nd overall and the 14th guard selected -- is easy to find in the running game, as he has consistently moved defenders off the ball.

He has played every snap on offense in the Browns' past three games. Among the league's rookie tackles, Wills has the best pass block win rate, according to ESPN Stats & Information. The 10th overall pick from April has just one holding penalty so far but did have false starts on consecutive possessions in Week 3.

Lewis has been exactly what many scouts saw in the draft buildup: a proficient and often devastating run-blocker with some work to do in pass protection. He struggles to get his footwork right in protection, but when the third-rounder is moving forward, he can certainly clear a lane in the running game.

Jeudy opened the season with two high-impact drops against the Titans, but he continues to show upper-tier, route-running savvy to go with top-end ball skills (Exhibit A is his touchdown catch in Week 4 as he snatched the ball away from Pierre Desir). He's getting work too, as the 15th pick leads the Broncos in targets and will be leaned on like a WR1 with Courtland Sutton on injured reserve.

After an interception in the season opener to go with five tackles in that game, Henderson has gotten caught up in the wash of the team struggling defensively a bit. He left the Week 4 game against the Bengals with a shoulder injury after playing 12 snaps.

Thomas has flashed his potential, but there is no question he got tossed into the deep end of the pool before he might have been ready when Nate Solder opted out for the season. And then the fourth overall pick got the Steelers in Week 1 for his trouble -- they are currently second in the league in sacks. The Giants haven't been able to really protect him much in an offense that is at or near the bottom of the league's rankings in every significant category.

When Johnson has been the nearest defender to the receiver at time of ball arrival, opponents are completing just 40% of their passes -- 8 percentage points below expectation, per NFL Next Gen Stats. That's excellent for a rookie corner. His success rate (measuring how often the defense is successful when targeted while accounting for down and distance) is tied for fourth-best among corners with at least 60 coverage snaps played.

Johnson has been fortunate a couple of times. In Week 3, both Calvin Ridley and Olamide Zaccheaus beat him deep, but Matt Ryan's passes were off target. But no corner is going to have every play perfect. Ultimately, Ridley was held catchless when Johnson was the nearest defender to him (and had just one catch on plays Johnson lined up across from him) in that game. 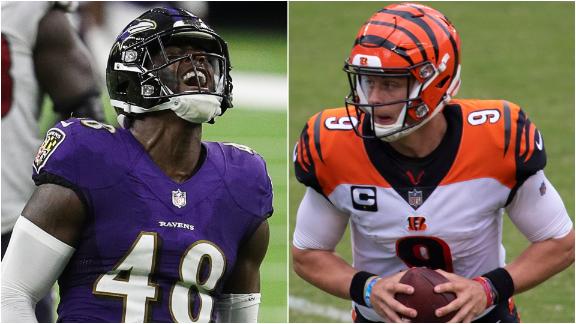 Which rookies have been most impressive through Week 4?
Dan Orlovsky shares his top rookies through the first four weeks of the season, highlighting Joe Burrow, Tristan Wirfs and Patrick Queen. 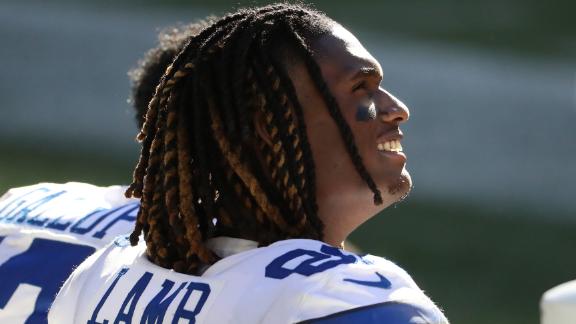