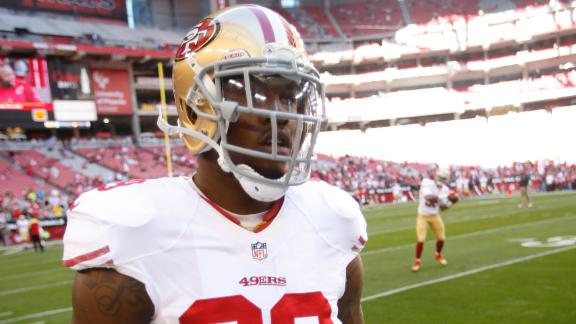 The San Francisco 49ersreleasedAldon Smithon Friday after the 25-year-old linebacker's arrest Thursday night on hit-and-run, driving under the influence and vandalism charges.

The arrest was Smith's third on suspicion of drunken driving since entering the league in 2011 as a first-round draft pick out of Missouri.He was booked into the Santa Clara County jail and released Friday on $26,000 bond

49ers general manager Trent Baalke met with the player after he left jail, and after Smith refused to take responsibility for being arrested, the team decided to release him,a team source told ESPN's Jim Trotter.

"This organization has tried very hard to help Aldon fight his issues," the team said in a statement. "Although he is no longer a member of this team, our support and concern for him will continue."

49ers coach Jim Tomsula rescheduled a team meeting and postponed the team's media availability until Friday evening, saying his players were hurting and that he would address Smith's release with them later. Tomsula was emotional himself in talking about Smith's situation.

"Sad day," the first-year coach said at a news conference. "This is a day that doesn't have anything to do about football. ... Although he won't be playing football for the San Francisco 49ers, he will be supported and helped, and he will not have to walk this path alone. That comes from our ownership down. ... We're not worried about football. This has nothing to do with football.

Later on Friday,Santa Clara police released details of Smith's arrest. A call was made at 8:46 p.m. local time Thursday to report a disturbance involving a crash, and responding officers reported that Smith had struck a parked vehicle while parking his own. After the incident, police said, Smith exited his vehicle and caused additional damage to the parked vehicle with his car door.

Smith was not on the scene and had not left identifying information for officers at the scene, according to the police report. He later returned to the area and was arrested.

Police said their investigation is ongoing.

"Justice will be served, the truth will come out,'' Smith told KTVU Fox 2 as he walked out of jail. "There's no DUI. ... I want everybody to understand the situation that happened could have been handled differently.''

Tomsula would not discuss the legal issues Smith is facing.The coach said he spoke to Smith on Friday morning, but "I would rather not talk about private conversations."

Because Smith has accrued four seasons in the NFL -- meaning he played in at least six games in each of those four seasons -- he immediately becomes a free agent. It's not expected, however, that he'll be immediately picked up by another team.

Smith was arrested on suspicion of DUI in January 2012, a charge that was later reduced to reckless driving. Later that year, he faced three felony weapons charges stemming from a June 2012 party at his home. Police said several shots were fired, two partygoers were injured and Smith was stabbed. Smith pleaded not guilty, and the weapons charges were later reduced.

Smith was arrested and charged with DUI again after a car accident in September 2013. He voluntarily entered rehab and missed five games that season. In July 2014, Smith was sentenced to 11 days of work release for that DUI in Santa Clara.

In August 2014, Smith was suspended for the first nine games of last season for violating the NFL's personal conduct and substance abuse policies, in connection to the 2013 drunken-driving arrest.

Smith also was arrested April 13, 2014, at Los Angeles International Airport. Police said he was randomly selected for a secondary screening and became uncooperative, telling a Transportation Security Administration agent he had a bomb. No charges were filed in that incident.

On Tuesday, Baalke talked about re-signing Smith, who was in his contract season with San Francisco.

"Aldon's like any young player," Baalke said. "He's growing up, he's maturing. You see that with a lot of these guys. Some of them get themselves in a few more situations that you wish they didn't ... [but I'm] really pleased with the way he's handled things, the way he's working both personally and professionally. I think he's doing an outstanding job. He's always been a great teammate. He's always had an excellent work ethic. Those are things he's even stepped up."

Former 49er Charles Haley, who is being inducted into the Pro Football Hall of Fame this weekend, told Trotter on Friday that Smith "needs help, and I'm not going to give up on him."

"I don't know how it affects his career, but it's more important about the man -- and I told him I'll always be there for him. I'm just sorry that he has to go through this.

"I spoke to him last night [before the arrest]. He called me last night, but he didn't tell me anything," Haley said. "All I know is that the kid has a big heart; he's got some things he's got to work through, and I'm just mad that I couldn't help him get through it. I laid everything I've done in my life on the line for him [to see] the troubles that I had. And I was hoping to be an example for him."

Information from ESPN 49ers reporter Paul Gutierrez and The Associated Press was included in this report.

49ers move on from Smith
ESPN reporter Jim Trotter discusses San Francisco's decision to release Aldon Smith and what happens next for the troubled linebacker.

Smith: 'Justice will be served'
49ers LB Aldon Smith says there was no DUI and the truth will come out.

Tomsula: 'He will not have to walk this path alone'
San Francisco 49ers coach Jim Tomsula discusses the release of troubled LB Aldon Smith.