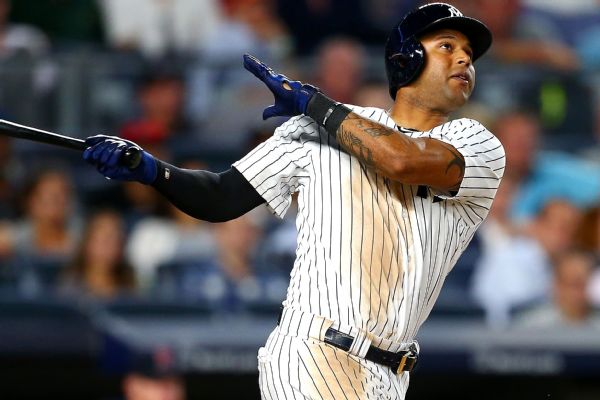 NEW YORK -- Outfielder Aaron Hicks agreed to a $2,825,000, one-year contract with the New York Yankees, who settled with reliever Tommy Kahnle at $1,312,500 in the first deals among the team's eight players eligible for salary arbitration.

New York's luxury tax payroll rose to $124,837,500 for nine players with agreements and Thursday's moves left the Yankees' projected tax payroll at about $178 million -- well under the $197 million tax threshold. The total includes $26 million estimated for the six players still eligible for arbitration, $10 million for the rest of the 40-man roster, $14,044,600 for benefits and a $3 million charge for cash transactions: a $5.5 million payment to Houston as part of the Brian McCann trade, a $500,000 payment to San Diego as part of the Chase Headley and a $3 million credit from Miami as part of the Giancarlo Stanton trade.

Hicks spent a pair of lengthy stretches on the disabled list but still managed to set career highs with a .266 average, 15 homers and 52 RBIs in a rebound from a poor first season in New York following his trade from Minnesota. He strained his right oblique muscle June 25 on a checked swing against Texas, returned Aug. 10, then strained his left oblique at Boston on Sept. 2 while making a running catch and came back Sept. 26.

Kahnle, with a fastball averaging 98 mph, was 2-4 with a 2.59 ERA in 69 relief appearances last year and made $547,000. He was acquired from the Chicago White Sox on July 19 along with reliever David Robertson and third baseman Todd Frazier. Kahnle had a 2.70 ERA in 32 games with the Yankees.