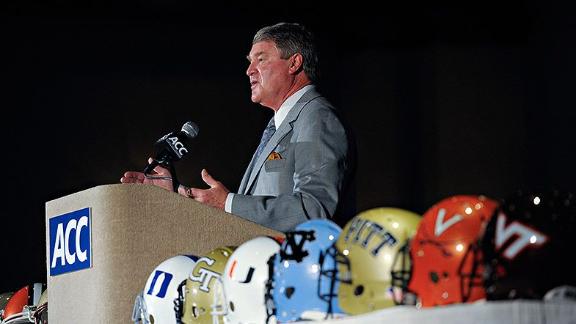 The league's athletic directors voted to remain at eight conference games Monday. It's just a formality but the league's faculty athletic representatives will officially approve it on Thursday.

Besides remaining at eight conference games, Swofford said starting in 2017 ACC teams must annually play at least one nonconference game against a team from a power five conference.

The ACC already has a scheduling agreement where five league teams will play Notre Dame annually. Those games would count toward teams' nonconference power five commitment.

Swofford said it matters who the eight- or nine-game league schedules are against to determine how difficult the schedule is. Swofford added that his only concern is for the ACC and not what other leagues are doing.

Fisher also referenced the strength of the ACC by comparing the number of players selected in last week's NFL draft. "Look at the numbers," he said.

The ACC's decision to remain at eight games is "a non-factor" from the television perspective, said Burke Magnus, ESPN's senior vice president of programming acquisitions.

"It is really a wash either way."

Swofford said it would be up to individual institutions to determine if it wanted to schedule future games against Football Championship Subdivision opponents.

"It's good for college football," said Fisher, whose Seminoles play The Citadel on Sept. 6. "It gives you David and Goliath."

Swofford added that the league hadn't been determined if independents BYU and Army (current independent Navy joins the American in 2015) would count toward the nonconference power five commitment.

There had been growing momentum in recent months toward moving to nine conference games, as athletic directors began to rethink their options with the upcoming College Football Playoff as well as imbalanced division crossover slates. The vote ended 8-6 in favor of staying at eight games. All the league needs is a simple majority to make its decisions.