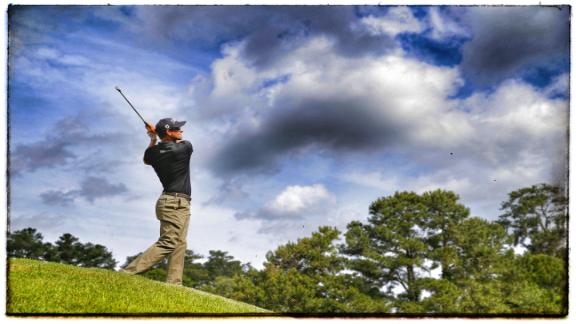 It's not often a professional athlete can ascend to the No. 1 ranking without actually competing, but that's the case for Australian Adam Scott.

When the Official World Golf Ranking is released after this week's HP Byron Nelson Championship, Scott will surpass Tiger Woods as the No. 1-ranked golfer in the world. He will become the 17th player -- and second Australian -- to hold that honor, even though he's not playing in Texas. Woods' decline comes after back surgery has kept him out of action for more than two months.

Scott isn't the first pro golfer to take over the top spot without swinging a club.

Nick Faldo, Ian Woosnam and Lee Westwood reached No. 1 for the first time in similar fashion. Bernhard Langer -- who was No. 1 in the inaugural world ranking on April 6, 1986 -- also accomplished the feat.

Scott had four mathematical chances over the past two months to replace Woods at No. 1. The 2013 Masters champion's best chance was to win at the Arnold Palmer Invitational in March, but he couldn't hold a 7-shot lead on the weekend. His most recent opportunity was the Players Championship, where he would have needed a 68 on Sunday. He closed with a 73.

Matt Kuchar, currently ranked fifth, might have been able to pass both Woods and Scott this week, but the Nelson field is not strong enough to garner enough world ranking points to put him over the top even if he wins.

This will be the 57th change at the top, and the 13th time that a new No. 1 didn't play the week before he got there. That includes Woods -- twice.

Faldo won the Masters and Open Championship and tied for third in the U.S. Open in 1990. He still didn't get to No. 1; at that time, the formula was different. Faldo injured his wrist at the PGA Championship, where he shot 80 in the third round and tied for 19th. He took off three weeks to let it heal, and when he showed up at the European Open, he was No. 1.

And don't forget about Westwood. He completed only two tournaments in a three-month stretch in 2010 because of a calf injury. Coming off the Ryder Cup, he took off three weeks and went to No. 1 while watching TV at home in England.

The most confounding of all was in 1999, the summer when Woods and David Duval were the top two players in golf. They were so good that IMG created a made-for-TV exhibition on a Monday night called the "Showdown at Sherwood," a battle between No. 1 and No. 2.

Woods was ranked No. 1 when he closed out Duval on the 17th hole. Both took the rest of the week off, and thanks to the mathematical wonder of the world ranking, Duval went back to No. 1.

Not that Duval cared how he got there.

"I guess that's the story right there," he told The Associated Press on Monday on his way to Dallas. "I don't remember."

He remembers the first time he got to No. 1. In front of a hometown crowd, and on the same day his father won on the Champions Tour, Duval won the Players Championship to replace Woods atop the ranking.

That's a lot more fun than being at home.

Rory McIlroy reached No. 1 for the first time by winning the Honda Classic. Luke Donald made his debut at No. 1 when he won the BMW PGA Championship at Wentworth in a playoff over Westwood, whom he replaced at No. 1. Donald has gone to No. 1 four times, three of them by winning.

Greg Norman won five times out of the 11 occasions he got to No. 1 -- with four of those wins on different continents. Woods won six times to get to No. 1, including two majors, the ideal way to reach the top of the ranking. Then again, he first reached No. 1 with a tie for 19th in the 1997 U.S. Open.

Ultimately, all of them would just as soon win a major than be No. 1. Scott said as much before leaving TPC Sawgrass.

"I think it's a nice feather in the cap," Scott said. "I mean, if I was never world No. 1 when I'm this close, I'd be disappointed. But I'd also much rather win the U.S. Open and not be No. 1 at all this year. That's what it comes down to."

Quiet Please: Adam Scott New No. 1
Michael Collins weighs-in on the pending change in the No. 1 ranking. Who should be No. 1?