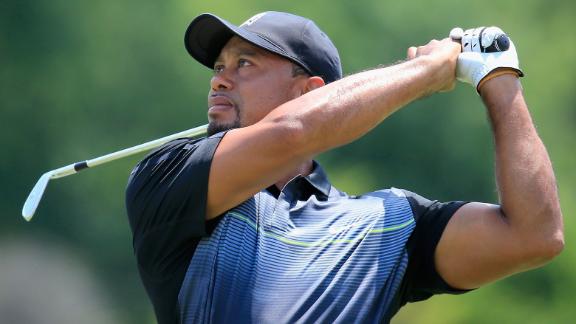 The agent for Tiger Woods said Wednesday that the golfer's wrist "is fine" after he clearly was in pain after hitting a tree root with his club on the ninth hole at Augusta National on Sunday.

Woods needed a few holes before the discomfort appeared to subside, but he appeared to be OK afterward.


Asked if there were any X-rays or doctor visits required, Woods' agent, Mark Steinberg, told ESPN.com in an email that "the wrist is fine."


Whether that means Woods, who finished tied for 17th at the Masters, can begin practicing again soon is unclear. He said he would not play again competitively "for a while.''

The Players Championship, a tournament he won the last time he played it -- in 2013 -- is scheduled to begin May 7.


Woods won't be eligible for the WGC-Cadillac Match Play, and he will need to add an event out of the norm if he has any desire to make the FedEx Cup playoffs.


He shot back-to-back rounds in the 60s and was in the third-to-last group before a 73 dropped him out of the top 10.


"It's going to take some time,'' Woods admitted afterward. "So I was pleased with the way I was able to hit the ball this week. I've got my pop back. And then on top of that I got my short game back, which was nice.''


After the Players, Woods is not likely to play again until the Memorial Tournament. The Wells Fargo Championship takes place the week after the Players but Woods' annual Tiger Jam fundraiser for his foundation is that weekend.