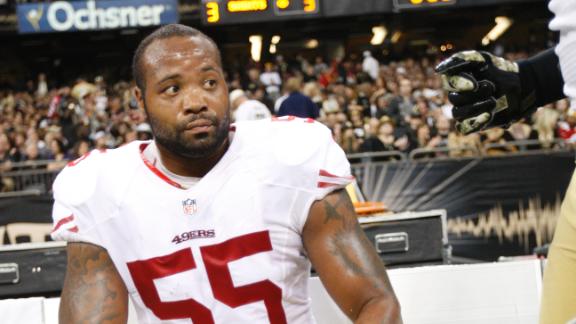 SANTA CLARA, Calif. -- San Francisco 49ers outside linebacker Ahmad Brooks spoke to reporters Wednesday about being benched in the second half of the team's 16-10 victory over the New York Giants on Sunday.

Brooks said he had words with defensive line coach Jim Tomsula and apologized to him and his teammates but disputed reports that he benched himself.

"It was an emotional reaction during the game, and I reacted out of my character," Brooks said. "I did not quit on the team; I did not take myself out of the game. But words that were said by me obviously couldn't be taken back. So they just decided to just not put me back in the game."

Brooks, who has started 58 straight games for the 49ers, became the odd man out in the second quarter at MetLife Stadium when Aldon Smith made his season debut fresh off his nine-game suspension and rookie Aaron Lynch remained in the game.

"We're moving forward as a team," Brooks said. "What happened happens every day in companies. You go to work, you're not always going to be on the same page with your co-workers. This is one of those instances. It happened on that day during the game, happened to me, so I sent my apologies to the team, so we're just moving forward.

Immediately after the game, coach Jim Harbaugh said the Niners "need" Brooks to win a championship.

Brooks would not say if he was fined for the outburst. He was asked if he expected to start again this weekend in Santa Clara against Washington.

"Am I expecting to start? I'm expecting to play," he said. "We never discuss our schemes ... our rotations with the 49ers. Whether I don't start or not, it really doesn't matter. As long as I'm out there playing, that's what really matters.

Brooks has been a second-team All-Pro selection the past two seasons with 15 combined sacks, two interceptions and 148 tackles. This year, though, while his four sacks lead the team, he has just 20 tackles and said he has not met his own expectations.

"I haven't been very productive, as I've been," he said. "But sometimes you have ups and downs. ... I've just got to look myself in the mirror. I've got to re-evaluate myself as a person, as a man, and just get better. That's all we can ask for as human beings. I took a step back, but I'm going to keep going forward."

Brooks was asked how he would react if he again falls out of the rotation.

"I'm going to hope and pray that it doesn't ever happen again," he said. "I don't want to feel like I'm second to anybody. If it ever were to happen again, I'd just keep my mouth shut and not say anything."