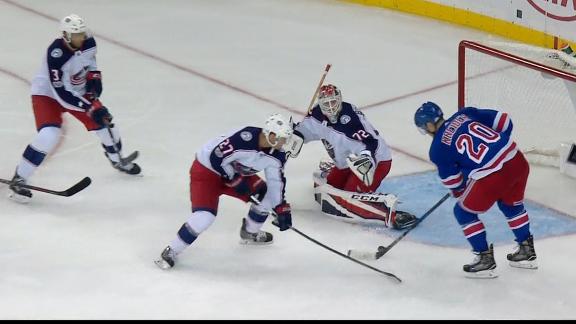 Which coaches should be most worried about being fired?

Emily Kaplan: If I'm New York Rangers coach Alain Vigneault, I know I don't have much leeway. Larry Brooks of the New York Post reported on Oct. 29 that Vigneault might have one game remaining. That was entering a game against the Vegas Golden Knights, who were on a long road swing and onto their fourth-string goalie. The Rangers scored four goals in the third period to win a wild one 6-4, then won the next three games -- including victories over Eastern Conference elites in the Tampa Bay Lightning and Columbus Blue Jackets. But, as editor Tim Kavanagh aptly notes, once rumblings come out that a coach could be fired, it's like a couple announcing they're exploring a divorce. If you make mention of it possibly happening, it's almost assured it's going to happen -- unless something extremely drastic changes. What's drastic for Vigneault? Have a November that's exactly opposite of the Rangers' October.

Vigneault is in a precarious spot. His team has made the playoffs in each season since he took over in 2013-14, including a Stanley Cup Final appearance. Last January, the Rangers extended Vigneault through the 2019-20 season and made him the third-highest-paid coach in the league (behind Mike Babcock and Joel Quenneville). This iteration of the Rangers, meanwhile, is hamstrung by bloated contracts (Rick Nash and Marc Staal) and a 35-year-old goalie in Henrik Lundqvist who seems to be regressing, even if it's hard to admit. Though management has maneuvered out of some of its pricey commitments -- a splashy move this summer that sent Derek Stepan to the Arizona Coyotes, a buyout of Dan Girardi -- the identity crisis is hard to ignore. Unfortunately for Vigneault, the Rangers' identity early in the season has been a team that looks sluggish in the first period. Vigneault knows: A coach-in-waiting in assistant Lindy Ruff (nearly 1,500 career games coached) is already on the payroll. In this four-game winning streak, the Rangers have played faster and closed out wins. Obviously, if they keep winning, Vigneault is safe and everyone in the organization is happy. But if there's any sign of regression, this coach is already on notice.

Greg Wyshynski: At some point, the honeymoon has to end for Bill Peters and the Carolina Hurricanes.

He's in his fourth season in Raleigh. Analytically, he's coached brilliantly: Since 2015, the Hurricanes are the fifth-best possession team (51.82 percent in Corsi) at even strength. They also had the worst save percentage in that time frame (.913). Improve the goaltending, stay the course, success will follow, right?

Sure, in theory. But as of today, Carolina has 11 points in 12 games, closer to the basement in the Eastern Conference than the playoff bubble. While their offseason goaltending solution Scott Darling continues to find his footing after a slow start, the Hurricanes have another issue: an offense that's producing 2.58 goals per game, including five of 12 games in which they've only scored one goal. And there's no Matt Duchene coming to the rescue of this underwhelming offense.

My concern isn't that Peters lacks coaching prowess, because I think he's a darn fine coach. My concern is that he misses the playoffs for a fourth straight season (and ninth straight overall), this time with improved goaltending but a sputtering offense; and that the Hurricanes fire a coach who's only signed through 2019 because of it.

In other words, if I'm Peters, I'm worried about being the scapegoat for a lack of postseason appearances.

Chris Peters: At what point do things get uncomfortable for Todd McLellan of the Edmonton Oilers? The Oilers were thought to have arrived following their playoff appearance last season, but are just three points from the NHL's basement, at 4-8-1.

When expectations are as high as the ones Edmonton came into the season with, the frustration that builds from a start this bad can lead to drastic measures. There is no question that the players have not lived up to expectations either, but it's also early enough in the season that the team can turn things around. McLellan is only in his third season with the Oilers, but the bar was reset last season and they're falling well below it (an understatement).

It would be an incredibly drastic decision to let McLellan go at this point, and it's certainly not something I'm advocating. That said, the organization has to be looking for a quick turnaround. When or if desperation sets in, nobody (except for Connor McDavid and Leon Draisaitl) is safe.