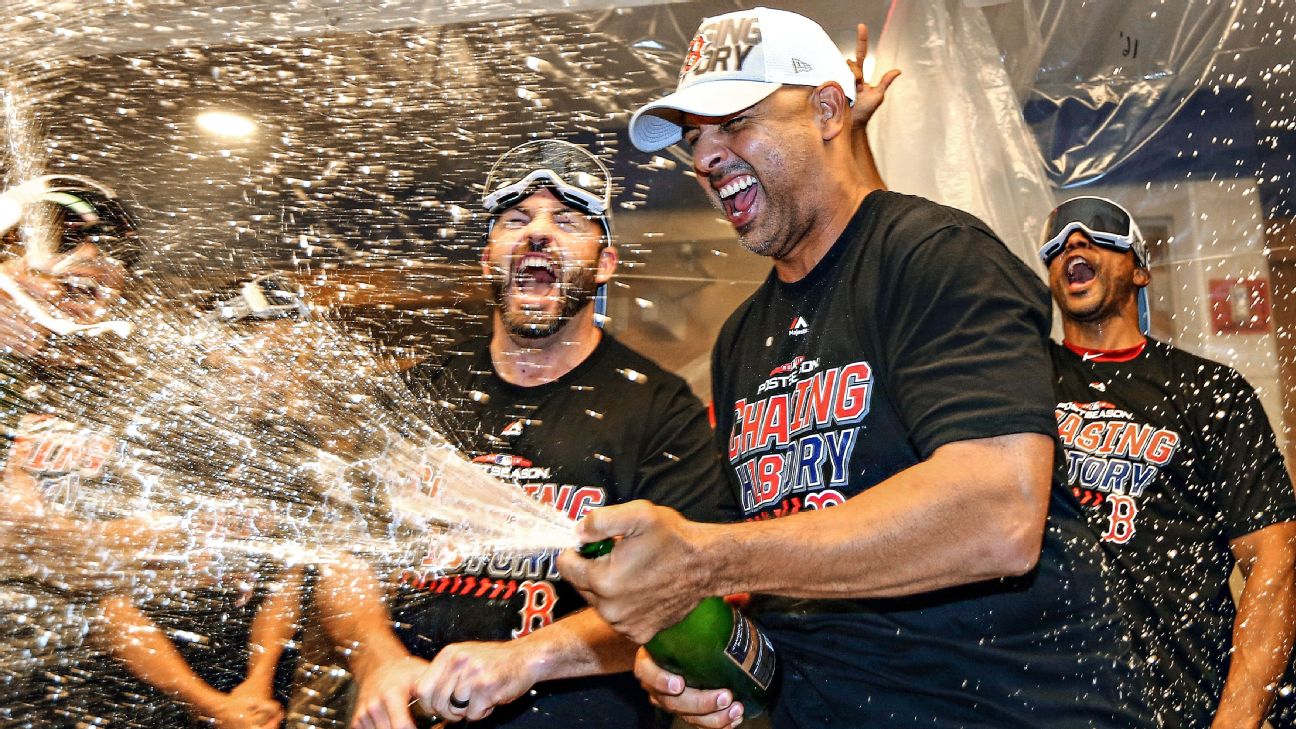 NEW YORK -- John Henry, the principal owner of the Boston Red Sox, stood inside the visiting clubhouse at Yankee Stadium late Tuesday night, answering questions from a group of reporters as the victory celebration blared in the background.

A year ago, Henry and president of baseball operations Dave Dombrowski made the decision to fire a successful manager, John Farrell, who still had a year remaining on his contract. Farrell had won a World Series in 2013 and back-to-back division titles in 2016 and 2017, but after consecutive defeats in the division series, Henry and Dombrowski looked outside the organization for a new manager.

They settled on Alex Cora, a former ESPN analyst who had spent 2017 as A.J. Hinch's bench coach for the World Series champion Houston Astros. He would be good with the media, would more easily identify with Boston's young players as he had played in the majors as recently as 2011 and would bring some of the Astros' analytic bent to the Red Sox's game preparation.

After the Red Sox eliminated the New York Yankees in four games, the soft-spoken Henry assessed Cora's performance thusly: "He was a magician."

Indeed, while Yankees rookie manager Aaron Boone received heavy criticism for waiting too long to pull Luis Severino in Game 3 and CC Sabathia in Game 4, every button Cora pushed in the series was the right one. Consider:

-- He brought in Rick Porcello in relief in the eighth inning of Game 1, and Porcello retired Miguel Andujar and Gary Sanchez.

-- He started Brock Holt in Game 3, and Holt became the first player in postseason history to hit for the cycle.

-- He reinserted Ian Kinsler for Holt in Game 4, and Kinsler doubled in a run with a rocket in the third inning and scored the third run of the rally on a single by Eduardo Nunez as the Red Sox took a 3-0 lead. Nunez himself was back in the lineup for Rafael Devers, who had two hits and two runs in Game 3.

-- He started Christian Vazquez in Game 4 to catch Porcello for the first time all year, and not only did Porcello throw five strong innings, Vázquez hit his first home run since June 26.

-- His bullpen moves worked to perfection in Game 4 as he pulled Porcello even though he had allowed just one run in five innings, and Matt Barnes, Ryan Brasier and then Chris Sale each threw a perfect inning (although closer Craig Kimbrel nearly self-destructed the game away all by himself in the ninth).

Managers get too much blame for October defeats -- Boone may be justifiably criticized, but it wasn't his fault the Yankees went without a home run in two games at home or that his starting pitchers were awful in three of the four games. Maybe managers get too much credit as well. After all, the moves only looked good because the players performed.

In retrospect, the decision to use Porcello in Game 1 was huge. The bullpen was struggling as Brasier, Brandon Workman and Barnes had combined to allow three hits and three walks while recording just five outs. With Steven Wright injured, Cora used Porcello to bridge the gap to Kimbrel. He then used Sale in a similar fashion in Game 4.

"It's a win-now mentality and that's what it took and we were able to get it done," Jackie Bradley Jr. said amid the celebration.

"We're very fortunate to have in A.C. [someone] who is not very far removed from playing the game, which definitely helps," he said. "It seemed like every button he's pushing is the right one. I think he's got a great feel for the game. He understands the game. He does a great job of managing and communicating with everybody on what's going on, and I think it showed in this series."

Sale even told the story that when he walked into the clubhouse before Game 4, he told Cora he wanted the ball at some point in the game.

"I told him and walked away and he started laughing, so I didn't know if that was a good or a bad thing, but it worked out," Sale said.

Cora was laughing -- but he was listening too.

Cora also influenced the team's off-field groundwork in three significant ways. He brought the advanced scouting department completely in-house, relying on video scouts and analysts. He shifted responsibility for defensive alignments from the coaching staff to the analytics department. He emphasized keeping players fresh -- not just down the stretch after the Red Sox had built a big lead in the AL East, but even going back to the first road trip of the season.

OK, so all that came together against the Yankees. What will be Cora's key decisions against the Astros? A few to consider:

Cora announced Wednesday afternoon that Sale will get Game 1 and David Price will start Game 2. Sale will be working on three days of rest after his 13-pitch outing against the Yankees, but he said after the game that he would have been ready for Game 5, so Saturday shouldn't be an issue.

Price is a different matter, given his poor performance in Game 2 against the Yankees and his spotty postseason history. Cora could have gone with Nathan Eovaldi and pushed Price back to Game 3 or even Game 4. A few things to consider:

-- Price was better at home than on the road this year, with a 2.98 ERA compared to 4.31 (although one-year home/road splits are always noisy). Starting Price in Game 2 would likely set him up to pitch Game 6 at Fenway, avoiding a start at Minute Maid Park (but forcing Price to deal with a potentially hostile home crowd if he gets into early trouble).

-- The Astros, with their righty-heavy lineup, crushed lefties, with the highest OPS in the majors against southpaws. But Cora will use his two lefties -- Sale and Price -- at Fenway, which could help a bit.

-- If the rotation goes Sale-Price-Eovaldi-Porcello, that leaves Porcello as a potential relief option in Game 1 or maybe Game 2.

2. How will Cora manage the bullpen?

One thing Cora has talked about is maintaining the willingness to adjust on the fly throughout the series and go to Plan B or Plan C. He learned from Hinch last postseason, who quickly abandoned Ken Giles and used starters in relief throughout the postseason.

Cora is not going to bail on Kimbrel, even though he allowed runs in both his outings. Still, Cora's initial plan, based on Game 1, was to use Kimbrel for more than three outs. We'll see if that remains the plan against the Astros.

As for the rest of the bullpen, it's about finding the hot hand. It helps that all those power relievers -- Barnes, Brasier, Kimbrel, Joe Kelly -- will face that predominantly right-handed lineup. The roles also will depend on where the Astros are in the lineup. In Game 4, Cora used Barnes against the middle of the Yankees' order in the sixth and Brasier against the bottom of the order in the seventh.

3. Who starts in the infield?

This could be a straight platoon, with Brock Holt and Rafael Devers playing against Houston's right-handed starters and Nunez and Kinsler starting against Dallas Keuchel. Or maybe Cora mixes and matches a little (Nunez and Kinsler are the better defenders, not that Nunez is a big plus at third, his final play in Game 4 notwithstanding).

I suspect we could see a lot of Holt in the series. Against pitches of 95-plus mph from right-handers this season, Holt hit .350/.386/.650 (granted, in just 44 plate appearances). Kinsler hit .207/.288/.276 in those situations. Kinsler versus Justin Verlander and Gerrit Cole doesn't feel like a good matchup.

Sandy Leon (.511 OPS) and Vazquez (.540 OPS) were both terrible at the plate in the regular season. Leon, however, hit just .095 in the second half (11-for-116). Cora went with Vazquez as the surprise starter in Game 4 and he may get the bulk of the duties moving forward.

Nothing stirs more arguments about a manager's performance in October than when he pulls the starter. We know the hooks are getting quicker and quicker, and removing Porcello after just 65 pitches in Game 4 was a sign that Cora isn't afraid to pull a starter a batter too early rather than two batters too late. 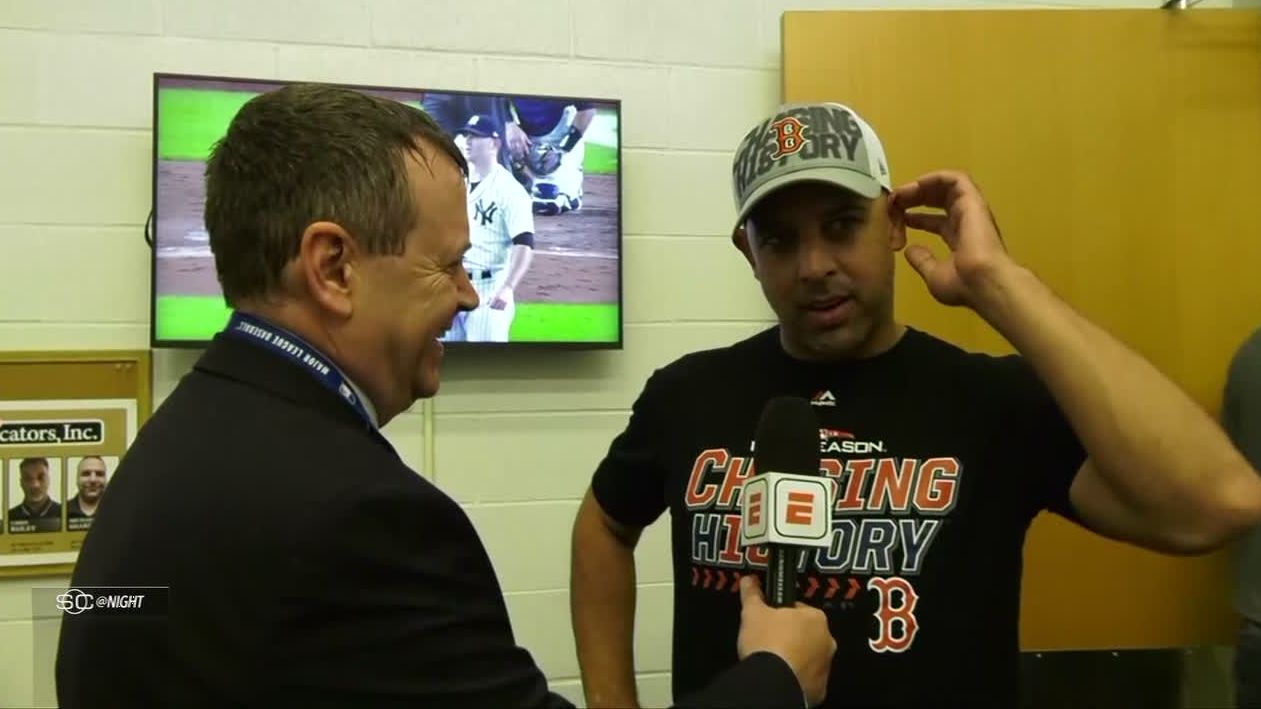