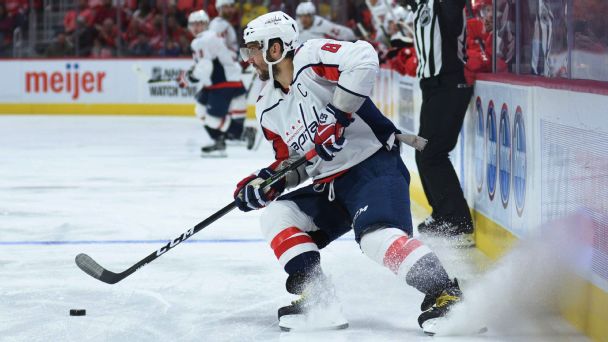 It's early in the season. Like, super early. If this were the movie "Titanic," Leonardo DiCaprio would have just won his boat ticket in that poker game and Billy Zane would simply be a dashing fiancé with slightly unsettling intensity.

That acknowledged, a few players and coaches (and one team) are clearly mending reputations, reversing negative career trends and attempting to rewrite the narratives that had been established for them.

Here are seven on the road to redemption:

When we last saw him: Puttering along to the lowest goals-per-game average of his career (0.40), which prompted fantasy owners to treat him like he was radioactive and critics to declare that we were witnessing the statistical downslide of the best goal scorer of his generation.

Now: Ovechkin has 10 goals in nine games, six of them at even strength. All of this comes after coach Barry Trotz split up Ovechkin and longtime center Nicklas Backstrom, as Ovi has played the majority of his minutes with Evgeny Kuznetsov. Ovechkin is (noticeably) lean and still mean, and it's great that he remains a scoring machine.

When we last saw him: Completing his second losing season with the Devils, this time a 70-point campaign that netted them the first overall pick in the draft.

Now: The Devils are off to a great start (6-2-0) but the real story is their offense, which is scoring 3.75 goals per game after Hynes' previous teams posted GFG of 2.20 and 2.22. Now, sustainability is a real question mark when their possession numbers remain substandard (minus-31 Corsi at even strength), and their shooting percentage is inflated (hence a PDO of 10.34, via Corsica). But the attacking style of Hynes finally seems like it has a roster to match its necessities, and I've been mulling over the necessity of my own mea culpa in asking for his head last season. They've been that good.

When we last saw him: Having gone from being a contender for "best player in the world" to "third-best player on the Flyers, maybe?" His 0.71 points per game was his lowest since 2010, and a 2016 All-Star pick was relegated to an afterthought.

Now: Giroux, who turns 30 in January, has 11 points in his first nine games. The Flyers moved him to the wing, and it's worked. Plus, he's healthy for the first time on a dozen months, which has helped fuel this Girouxnaissance.

When we last saw them: Finally admitting to, and committing to, a rebuild, rather than trying to prop up an eroding lineup with free agents and middling veterans. In other words, they're playing the kids and reloading for the future.

Now: The Canucks are 5-3-1, even if many of those wins aren't exactly against Stanley Cup contenders. It's still a rebuild and it's still not a season that portends a playoff spot. But kudos to new coach Travis Green for getting this group going early and, for the moment, properly deploying the Sedin twins as they skate into the twilight.

When we last saw him: As a hasty replacement when Patrick Roy lost his smile and quit the Avalanche in August 2016, Bednar oversaw a pathetic 48-point season whose only mystery was whether Matt Duchene would be moved at the trade deadline or the draft.

Now: Duchene is still in Colorado, and Bednar has helped ease that tension behind the scenes with the star player. Bednar also had a full offseason to figure out the roster and gain the trust of players, and the Avs are off to a thoroughly decent 5-4-0 start for a coach who's won on every level (save for last season). Now, it should be said that Semyon Varlamov's .929 save percentage has bolstered the team, but Bednar would be far from the first Avalanche coach whose reputation was boosted by a hot goalie.

When we last saw him: Demoted from captain and, despite a slight uptick in offense, having everyone assume he could be on the Golden Knights' opening-night roster because of his albatross of a contract.

Now: He has 11 points in nine games. He has a shooting percentage of 14.3, which is in no way sustainable but has earned him ice time with the equally resurgent Anze Kopitar's line, after former coach Darryl Sutter moved him around like Milton in "Office Space" last season (and Dustin didn't even got a slice of that birthday cake and they stole his stapler, according to reports).

Speaking of the Knights ...

When we last saw him: Doing the wait of shame for a taxi cab after being fired by the Florida Panthers after 22 games last season, and then taking a job with the expansion Golden Knights that most figured wouldn't produce a winning season for a few years.