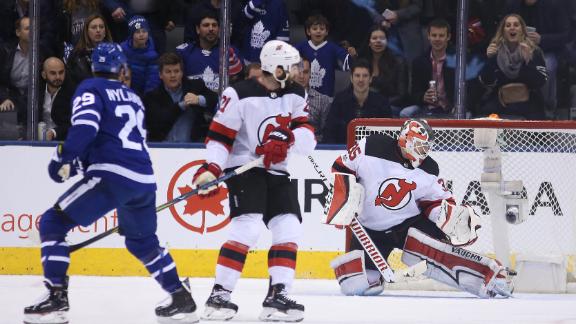 What was the most impressive performance from Thursday night's games?

Emily Kaplan: For me, it was the goaltending in the New Jersey Devils-Toronto Maple Leafs game. I fully intended to watch the first period of this game and then switch to something else, but I was hooked from the scoreless first period on. In what was billed as a matchup of two of the youngest, fastest and highest-scoring teams -- Toronto came in with 3.8 goals per game while New Jersey was at 3.6 --Frederik Andersenand Cory Schneider stole the show. I suppose Andersen should get the nod over Schneider, seeing that the Toronto netminder turned away an impressive 42 shots to earn the shutout in a 1-0 overtime win. However, Schneider (who stopped 25 of 26 shots) robbed the Maple Leafs all night, including a sprawling stick save on James van Riemsdyk in the first period that I'm still thinking about.

A couple of weeks ago, Ben Arledge cited Schneider as the most underrated goaltender in the league, and I think I might be a convert. Andersen, too, turned things up, especially in the extra period -- including denying Nico Hischier and Will Butcher while Toronto killed off a penalty. It was a historically impressive performance: Andersen's 42 saves were the most by a Leafs goaltender in a shutout home win since Mike Palmateer turned away 47 shots against the Detroit Red Wings in 1977.

The important thing for the Leafs is that Andersen has turned up his game. Although he has allowed five or more goals five times in 17 games, in his past seven games he is 5-2, has a 2.42 goals-against average and a .930 save percentage. The Leafs seem to have worked through their early funk, and -- now, with five straight wins -- are showing they can win without Auston Matthews, who is sidelined with an upper-body injury. In the meantime, stick taps for the goalies.

Chris Peters: The Tampa Bay Lightning are the NHL's best team by a country mile, and Steven Stamkos is putting up mid-1990s kind of numbers (which are probably better than video-game numbers). In Thursday night's 6-1 win over the Dallas Stars, Tampa's captain scored two goals and added a pair of assists to continue his reign of terror. It was a very unpleasant way to welcome former teammate Ben Bishop back to Tampa, but this is how most goalies feel against the Lightning these days.

What made this game particularly impressive was that for Stamkos, it's become almost routine. This was the fifth game this season in which No. 91 has registered three or more points. Stamkos also played under 17 minutes Thursday night, only the second time that has happened this season. There have also been only two games when he's been held off the score sheet in 2017-18. Stamkos is now up to 35 points in 19 games, good for a projected 151 points over a full 82-game season.

Although it's highly unlikely that Stamkos keeps up that pace -- that total would give him the most points in the NHL since thePittsburgh Penguins'Mario Lemieux had 161 in 1995-96 -- he's been otherworldly. By the way, teammate Nikita Kucherov had three more points against the Stars, including his 17th goal, and is now on a 142-point pace. You figure something will happen that slows them down eventually, but it's hard to figure out what or when that will be. Thursday was another great example of their brilliance and dominance.

Greg Wyshynski: The Minnesota Wild and the Nashville Predators were my game of the night, and they rewarded me with a game featuring all kinds of excitement.

The Predators jumped out to a 3-0 lead, on the road, thanks to a goal and an assist each from Ryan Johansen (his first goal of the season) and Mattias Ekholm, who scored on a short-handed breakaway, which you don't see every day from a defenseman. Johansen's goal came 49 seconds into the game and halted Devan Dubnyk's three-game shutout streak.

Then the Wild roared back on goals by Matt Dumba (his first) and Nino Niederreiter, and had a goal taken away on video review. Niederreiter turned the puck over to set up a Viktor Arvidsson goal to make it 4-2 ... and then the most emphatic rally of the season occurred.

At 13:04 of the third period, Ryan Suter scored for the Wild. One minute, 57 seconds later, Eric Staal scored on the power play to tie the game. Two minutes, four seconds after that, Jason Zucker scored his 11th of the season, extending his points streak to six games, and the Wild were ahead 5-4. Jared Spurgeon ended it with an empty netter at 18:53 for the 6-4 win, and frankly, I'm exhausted having recapped the four goals in the last seven minutes of the game.

"The last 25 minutes, we were emotionally into it. The first 35 minutes, we weren't, and it showed," Minnesota coach Bruce Boudreau, who benched his top two power-play units early in the game, told reporters afterward. "I'm happy we won, but I'm not happy we didn't play 60 minutes."

Yeah, but if you had, then we wouldn't have had the most impressive performance of the night: the mad scramble by the Wild in the last seven minutes to win their fourth straight and move into a wild-card spot in the wacky West.

Nylander's OT goal lifts Leafs past Devils
With the game still scoreless in overtime, William Nylander sends the puck flying through Kyle Palmieri's legs and past Cory Schneider in net for the Maple Leafs' only goal in a 1-0 victory.