Anquan Boldin: Colin Kaepernick needs to tune out others, trust self 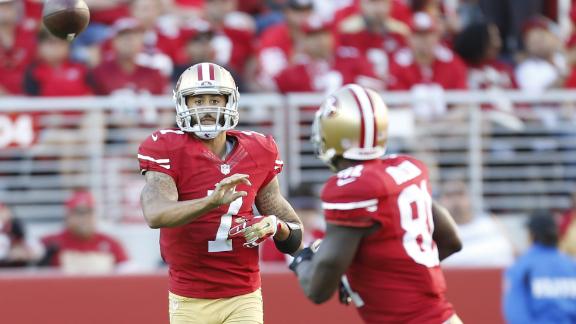 Colin Kaepernick has been lauded by the powers that be inside the walls of 4949 Centennial Blvd. in Santa Clara for his willingness to go outside his comfort zone in an effort to improve as a more multi-dimensional quarterback.


Indeed, the San Francisco 49ers' dual-threat signal-caller has spent most of his offseason in Phoenix, training at the Exos gym and getting one-on-one work with the likes of Kurt Warner.

Kaepernick's top target the past two seasons, though, has a buyer beware-type message and advice for his quarterback.


"I think sometimes when you try to go off suggestions of other people and try to please other people, you forget who you are and what got you there."


It was painfully obvious last season under Jim Harbaugh that the Niners were attempting to make Kaepernick more of a traditional pocket passer in the wake of the quarterback signing a team-friendly, seven-year, $126 million contract. And while he is one of the more mobile quarterbacks in the league, he was sacked a league-high 52 times.


He did rush for 115 more yards, though, with 90 coming on one breathtaking run.


"Trust your skills," said Boldin, whose 168 receptions on 259 targets the past two seasons combined lead the Niners. "Trust the athletic ability you have and just go for it."


New coach Jim Tomsula, when asked in his introductory news conference if Kaepernick had to be unleashed again, said he wants his players to have fun playing football.


"I think it was a very favorable experience for Colin," Tomsula said at the recent NFL owners meetings of Kaepernick's time in Arizona. "And he had some guys down here working with him. Some wide receivers were able to make it down, but I don't have any insight into it because we're not allowed to.


"But everything I've heard has been very favorable. I know Colin felt it was very valuable for him and really, that's the most important thing."


Boldin said he has already given his two cents to Kaepernick.