Are you buying the Yankees' hot start? 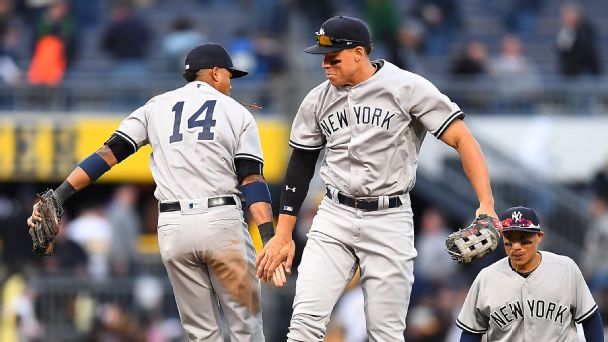 Aaron Judge is blasting 460-foot moonshots. CC Sabathia is on pace for 18 wins. Despite losing two of three in Pittsburgh over the weekend, the New York Yankees head into a three-game set at Fenway Park against the rival Boston Red Sox as winners of 10 of their past 13 games, jumping to No. 5 in our MLB Power Rankings.

So is something special brewing in the Bronx, or is it just too soon to bet on the Bombers?

Is Aaron Judge a stud?

Andrew Marchand: Judge's history at nearly every level of professional baseball has been to struggle at first, then hold his own. The majors don't seem to be any different. He struck out 42 of 84 at-bats in 2016, but now looks fearsome. If he is a .260, 35-homer and 100-RBI guy, I think the Yankees would sign up for that. Who doesn't think that's realistic? And he might be even better than that.

Sam Miller: With the caveat that everything is prone to exaggeration in early season stats, yes, he is. Nobody hits the ball harder than Judge -- maybe not even Giancarlo Stanton -- and the pleasant surprise has been that he's not swinging and missing very often, with a contact rate close to the league average. And he's young and spry enough to avoid being a liability on defense or the basepaths.

David Schoenfield: He's obviously swinging the bat well, and there's a chance he's on a fast learning curve. After striking out 44 percent of the time in his major league call-up in 2016, he's cut that down to 25 percent. If he can maintain that rate, he willdo a lot of damage. At the same time, his minor league numbers were also more good than great, so I'm not ready to call him the next Dave Winfield after 60-something at-bats.

Can this lineup hold up?

Marchand: Well, they don't have Gary Sanchez or Didi Gregorius, so the question might be: Could they become even better? The thing is, Ronald Torreyes has been as good as Gregorius at short, while Austin Romine has held steady behind the plate. Chase Headley might have a very good year, but right now he might be the AL MVP. It would be hard to argue that that will continue.

Miller: For every case of "no way can this keep up" -- Headley's .339 batting average, Aaron Hicks' .727 slugging percentage, Jacoby Ellsbury's best OPS+ since 2011 -- there's an equally plausible reason for optimism. Greg Bird has been making contact again and just needs a few balls to fall in, and Sanchez and Gregorius will return to the lineup. In the aggregate, it could be a considerably better lineup than last year's well-below-average group, but the April "breakouts" are mostly coming from established veterans who, realistically, probably aren't really breaking out.

Schoenfield: They were leading the AL in runs per game at the start of the week and they've been doing it without Sanchez and Gregorius. Of course, the guys playing in place of them have been terrific -- Romine has an .840 OPS and Torreyes has 13 RBIs. I love the addition of Matt Holliday, who will grind out at-bats and take his walks, and there is some depth on the bench. I'm not sure I'm buying all the power just yet: Judge, Hicks and Starlin Castro have combined for 14 home runs, a pace they won't keep up. So, is this a top-three offense? Probably not, but it should be better than last year when the Yankees were 12th in the AL in runs.

Is CC Sabathia back?

Marchand: It depends how you define "back." He is nothing like the hard-throwing Cy Young Award winner, who received a 10-figure contract. However, he is a legit starter, whose smarts have transformed his career to the point that his goal to play a lot longer seems very realistic. If he is a legit No. 2 starter, the idea of a Yankees wild card has more weight.

Miller: In fact, he's probably less "back" than he was last year, when he was sort of back. His strikeout and walk rates are just awful -- no starter in baseball last year had a higher walk rate and a lower K rate and managed to make it to even 75 innings -- and his overall strike rate this year is his lowest since 2004. It's only four starts, so it's too early to draw conclusions, but that's even more true when talking about something as volatile as ERA or win-loss record.

Schoenfield: I'd say the upside is something similar to last year, when he finished with a 3.91 ERA. The stuff isn't there to return to his old ace-level status, his walk rate is still higher than peak Sabathia and his strikeout rate through four starts is down even from last year. He's certainly learned to nibble at the corners, but he's a pitcher living right on the edge.

What about the rest of the rotation?

Marchand: I usually say that over 162 games, your beliefs usually bear out. Before the season, there was a rosy outlook, where Masahiro Tanaka is a Cy Young candidate, Sabathia continues his reinvention into an Andy Pettitte-clone, while Michael Pineda and Luis Severino reach their potential. Jordan Montgomery looks like he could be a real MLB starter. So, yes, they could have a very good year, though, I'm not totally sold.

Miller: Pineda and Severino have combined to strike out 56 batters and walk five. Then there's the nine home runs allowed and the hard contact, but there aren't many pitchers who have combined strikeout stuff with great control who have not succeeded.

Schoenfield: If there's a reason for optimism for the 2017 Yankees, it's the early performances of Pineda and Severino. Sure, Pineda has done this kind of stuff before, so you never know, but strike-throwing machine Severino looks like a different pitcher.

Verdict: Are you buying the Bombers?

Marchand: I thought the Yankees would win around 84 games. I'll stay in that range, though they have come out very strong against a weak schedule. The Rays, White Sox and Cardinals might all be last-place teams, or close to it, this year. The Yankees can only beat who is in front of them. So far -- especially at home -- they have done a fine job of it. So I think there is evidence that they will finish above .500 again, but I don't think they are a World Series contender -- yet.

Miller: They were a .500 team coming into the season and they've banked a couple extra wins early. That's enough to join the wild-card race.