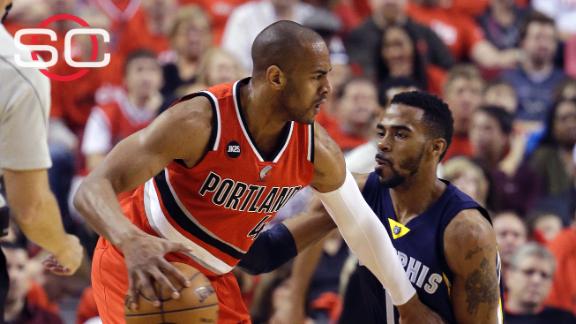 The New York Knicks and Arron Afflalo agreed to a two-year deal worth $16 million on Thursday, a source told ESPN.com's Ramona Shelburne.

The agreement includes a player option for the second year of the deal, sources said, which could allow Afflalo to again test free agency after next season.

The deal with Afflalo is the Knicks' first move in free agency but one that should help the struggling franchise, which is coming off a 17-65 season. And it comes at a reasonable cost considering all the money spent on the opening day of free agency Wednesday across the league.

Afflalo is the type of two-way player Knicks coach Derek Fisher can use and should be able to provide the kind of shooting that departed when Tim Hardaway Jr. was traded on draft night in exchange for drafting Notre Dame combo guard Jerian Grant. Afflalo is a 38.5 percent 3-point shooter over his eight-year career and averaged a career-high 18.2 points and 42.7 percent 3-point shooting during the 2013-14 season with the Orlando Magic.

Afflalo also is familiar with Knicks star Carmelo Anthony; the two were teammates with the Denver Nuggets from 2009 to February 2011.

The Knicks, who have more than $19 million remaining in cap space this summer, do not have a center under contract for the 2015-16 season, so finding a big man is a priority in free agency.

They have met with Greg Monroe and Robin Lopez and have meetings scheduled Thursday with DeAndre Jordan and LaMarcus Aldridge.

New York filled a void on the wing by signing Afflalo. The club also had shown interest in Monta Ellis, Danny Green andWesley Matthews, per sources.

Afflalo, 29, was traded to the Portland Trail Blazers by the Nuggets last February in exchange for Will Barton, Victor Claver, Thomas Robinson and a 2016 lottery-protected first-round pick. He appeared in 25 games (19 starts) for Portland.

The 6-foot-5 shooting guard proved a crucial piece late in the season for the Blazers after guard Wesley Matthews was lost for the season with a torn Achilles. Afflalo averaged 10.6 points in 30.1 minutes per game, shooting 40 percent from 3-point range. For the season, he averaged 13.3 points in 78 games.

Prior to the 2014-15 season, Afflalo was traded from the Magic to the Nuggets in exchange for Evan Fournier and Roy Marble. In 2012, he was the centerpiece for the Magic in the four-team Dwight Howard trade.

Afflalo was drafted 27th overall out of UCLA by the Detroit Pistons. In eight seasons, Afflalo has played for four teams, which includes two stops with the Nuggets. For his career, he's averaging 11.4 points in 577 games.

Afflalo was an unrestricted free agent after exercising a $7.75 million player option.

ESPN.com's Ohm Youngmisuk and Royce Young contributed to this report.