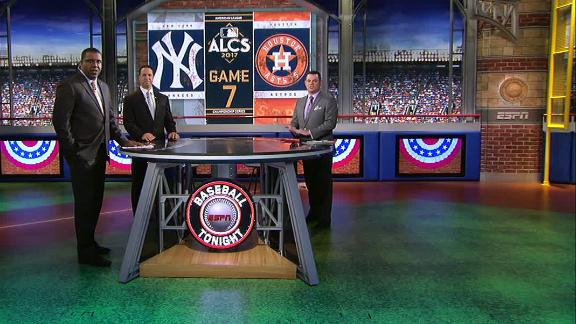 HOUSTON -- Dallas Keuchel will watch Game 7 of the American League Championship Series from a different vantage point: the bullpen.

Like the rest of the Houston Astros' pitchers, save Game 6 hero Justin Verlander, Keuchel will be available out of the bullpen Saturday night. Right-hander Charlie Morton will start for Houston against New York Yankees lefty CC Sabathia, but with the AL pennant and a chance to advance to the World Series on the line, both teams will take an all-hands-on-deck approach to deploying their pitchers.

Morton versus Sabathia will be a rematch from Monday night when the Yankees routed the Astros 8-1 in Game 3 in New York. Morton allowed seven runs on six hits in only 3 innings, while Sabathia shut out the Astros for six innings.

Verlander pitched the Astros to a 7-1 victory in Game 6 here Friday night. He threw 99 pitches in seven scoreless innings, his second gem of the series. In Game 2, Verlander tossed a 124-pitch complete game in a 2-1 victory.

The Astros' bullpen has struggled throughout the postseason and particularly in this series. In Game 4, Astros relievers gave up almost as many runs (five) as they recorded outs (six). Even in Game 6, Brad Peacock allowed a homer to Aaron Judge in the eighth inning, and closer Ken Giles put two runners on base in the ninth before recording the final out.

"You're going to see a game played with everybody available," Astros manager A.J. Hinch said of Game 7. "Probably not Verlander. But he's superhuman, so we'll see how he shows up [Saturday]."

Said Keuchel: "Any way we can help out, we're trying to get to the World Series. I mean, it's all hands on deck besides Verlander. I think he's done enough for us already."