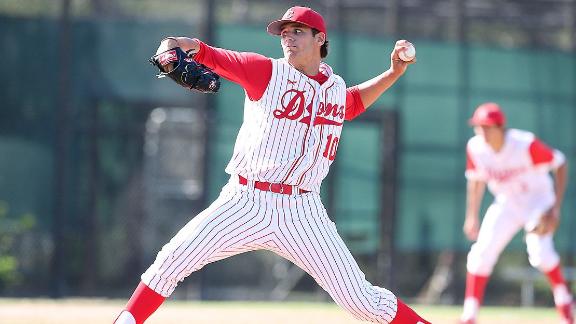 The head of the players' association says the union is working with the pitcher and his advisers to explore "all legal options."

Aiken originally was offered a deal with a $6.5 million signing bonus by the Astros, a person familiar with the negotiations said earlier this week, speaking on condition of anonymity because no statements were authorized. But the club expressed a concern over Aiken's elbow ligament and lowered the offer, the person said.

The union is also concerned with Houston's handling of the negotiations with fifth-round pick Jacob Nix. The right-hander from Los Alamitos, California, didn't sign either.

"Today, two young men should be one step closer to realizing their dreams of becoming Major League ballplayers," union head Tony Clark said in a statement. "Because of the actions of the Houston Astros, they are not. The MLBPA, the players and their advisers are exploring all legal options."

The Astros insisted in a statement that their offer to Aiken "was extremely fair considering all the factors involved in this case."

"As always, we approached these negotiations in good faith and with the best interests of the Astros organization in mind, both short-term and long-term," the team said. "Throughout this entire process, we have absolutely acted within Major League Baseball's rules and guidelines, which MLB has confirmed on numerous occasions."

"We believe that they have conducted themselves appropriately," Halem added.

Aiken was just the third high school pitcher to be selected first overall when he was taken last month, joining fellow lefties Brien Taylor (1991, Yankees) and David Clyde (1973, Rangers). He was also the first high school lefty to be drafted in the first five picks since Adam Loewen went fourth overall to Baltimore in 2002. Both Aiken and Nix have committed to UCLA and are being advised by Casey Close.

Aiken has terrific control of a fastball that hits 96-97 mph, a knee-buckling curve and a tough changeup that sits in the low- to mid-80s. On draft day, Astros general manager Jeff Luhnow raved: "It's the most advanced high school pitcher I've ever seen in my entire career."

"He has command like I've never seen before of his stuff," the GM said.