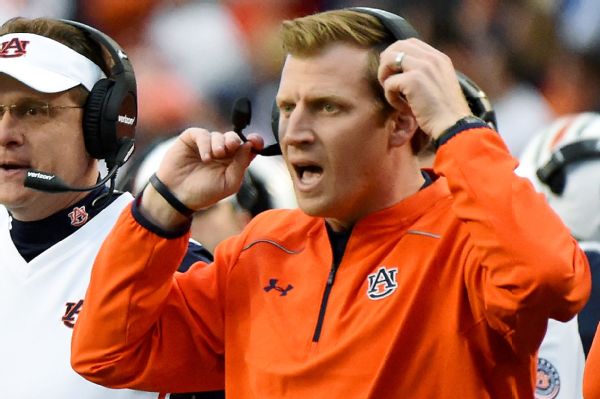 Lashlee had been at Auburn since 2013, spending four seasons as Gus Malzahn's offensive coordinator. In 2013, he was named a finalist for the Broyles Award, which goes to the best assistant coach in college football. He has also had brief stints at bothArkansas StateandSamford.

Lashlee and Malzahn have been close since Lashlee was a high school quarterback at Springdale (Arkansas) High School, where Malzahn was the head coach. But there was speculation that Lashlee wanted to get out from underneath his longtime mentor.

"This is a great opportunity for Rhett to implement and run his own offense," Malzahn said. "I've known Rhett for two decades, and he's a man of great character and integrity and this is another step towards his goal to become a head coach. I want to thank Rhett for all of his contributions and his friendship. I want to wish he and his wife Lauren all the best in this new endeavor."

This past season, for the first time in his career, Malzahn turned the playcalling duties over to Lashlee following a 29-16 loss to Texas A&Min Week 3. With Lashlee calling the plays, Auburn won six straight games. However, the Tigers lost three of their final four games, including a 35-19 defeat to Oklahomain the Allstate Sugar Bowl earlier this month.

Now, for the first time in his career as a college head coach, Malzahn will have somebody other than Lashlee as his offensive coordinator.