Auston Matthews, Connor McDavid are great, but bet on Patrik Laine and the Jets to win a Cup first 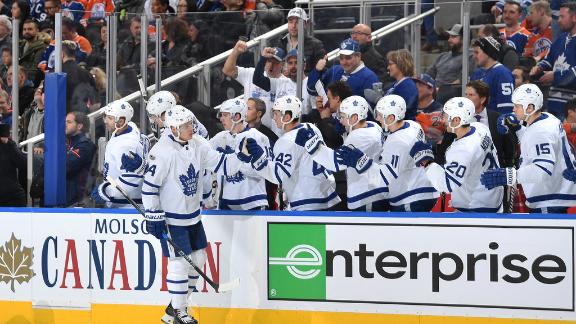 Emily Kaplan: If I was asked this question two months ago, I would have answered McDavid,without hesitation. I believed that the Edmonton Oilers were poised to win a Stanley Cup as soon as this season. Given where things stand now in Edmonton, I'm not as bullish.

I do see Auston Matthews hoisting a Cup for the Toronto Maple Leafs-- heck, probably while wearing a C on his sweater when that happens -- but just not yet. The Maple Leafs are still working on their rebuild, and while they've landed a bit ahead of schedule, it's not likely to happen this year or next.

So which team led by a young star is imminent? That's the best team in Canada right now, the Winnipeg Jets. And that means Patrik Laine's star is going to skyrocket.

The 19-year-old is on the brink of becoming the biggest celebrity in his native Finland, with an almost Teemu Selanne-level of interest (and hysteria) already. Anyone who has watched Laine play -- and specifically, his wicked shot -- knows he could be the league's next great sniper, a la Alex Ovechkin. He's a terrific passer, and he's physical, too. Although Laine had a slow start to the 2017-18 season -- in his words, hockey was really hard for him -- his Jets haven't missed a beat as the sleeper team to watch. Winnipeg finally has the goaltending (a stellar Connor Hellebuyck), balanced scoring and a lot of it (3.24 goals per game). The Jets are ahead of the usual suspects in a feisty Central Division, trailing only theSt. Louis Blues.Oh, and Laine has picked up his game. As a front-office executive told me this summer for ESPN's Now & Later rankings: "Mark my word, [the Jets] could make a run in a few years." I think it could be sooner than that.

Chris Peters: While I don't believe that any of the players listed will be hoisting the silver chalice at the end of this season (or even possibly next), I think Matthews will ultimately win this race.

While the New Jersey Devils are ahead of schedule, I think they still have a few years of roster building ahead before we start putting them into the contender category. TheBuffalo Sabreshave shown so far this season that they're still a ways away, perhaps further than we thought. I firmly believe that McDavid is going to hoist at least a couple of Cups before his career is over, but it seems like the Oilers knocked themselves off course with some of their offseason moves the past few years. Matthews' biggest competition will come from Laine and the Jets, who appear to be at a similar stage in their development as a franchise.

I'm sticking with the Leafs mainly because I think they're already close and they have a management group I'd trust to make the right moves to put the finishing touches on this roster. The Brendan Shanahan era in Toronto has included many positive steps, with a little luck along the way -- like winning the draft lottery in 2016, which allowed them to nab Matthews with the first pick. Without that franchise centerpiece, we're not even having this conversation.

There are definitely a few questions left unanswered about Toronto, from the top of the organization all the way down to its minor league system, but the Leafs are doing things the right way to turn things around. Shanahan and GM Lou Lamoriello have guided this organization with a steady hand, while not taking short cuts. Now that they're closer to contention, perhaps there's a little more willingness to take a big swing on a trade or free agent to help put them over the top.

Greg Wyshynski: I figured that my colleagues would acknowledge Matthews and the Maple Leafs without mentioning the 50-year-old elephant in the room: It's the Leafs!

Yes, the Cubs and Red Sox have made the world safe again for teams with epic championship droughts to irrigate the field and grow a winner, but we've seen unbridled optimism swallowed up into that abyss before. Which is another way of saying "best hope Drew Doughty and/or Erik Karlsson aren't just using Toronto's deep coffers to leverage their own new deals because this team needs an elite defenseman."

I want to say McDavid. I mean, I'd like to say McDavid. But we're getting a real glimpse as to why the Oilers were so good last season (Talbot's career year) and why they might not be, going forward (Peter Chiarelli's mismanagement). I want to say the Devils, for obvious reasons, but I'm a little worried about them hitting their stride just as Cory Schneider hits his decline. I want to say Jack Eichel, but I'm pretty sure even Eichel wouldn't say Eichel at this point.

I agree with Emily: Laine might have the best shot at winning the Stanley Cup soonest. He's surrounded by elite talent up front. The back end is ... OK. The goalie, Connor Hellebuyck, looks to finally have found his "Franchise Goalie" form that had been promised for years.

They're not perfect -- I don't love the possession numbers, and I've never really loved the coach -- but they might have a sweet-spot window before Dustin Byfuglien completely falls apart. And say this for Laine and the Jets: That's a heck of a home-ice advantage they're going to have in the playoffs.

So with the caveat that the Leafs might be one elite defenseman away but still have to overcome the Curse of '67 ... Go, Jets, Go.