Backs against the wall, Rangers answer the call with big Game 3 win 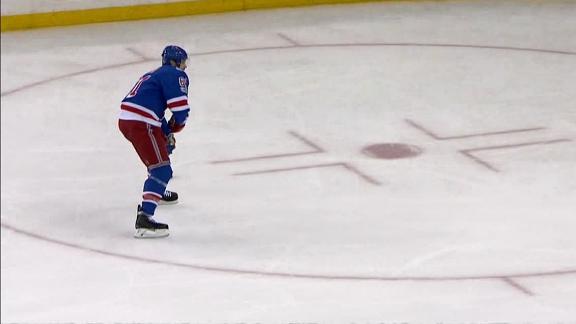 NEW YORK -- We have a series, after all.

The New York Rangers bounced back in a big way in Game 3 of the Eastern Conference semifinals, defeating the Ottawa Senators 4-1 at Madison Square Garden on Tuesday.

The home team was under heavy pressure after losing the first two games in Ottawa, including a gut-wrenching 6-5 double-overtime defeat in Game 2, in which they blew a two-goal lead late in the third period.

But the Rangers quickly put the Senators under pressure in Game 3, taking a 2-0 lead thanks to early goals from Mats Zuccarello and Michael Grabner. New York outshot Ottawa 15-5 in a penalty-free first 20 minutes.

Things were a little more even in the second period, but when Rick Nash added a third goal at the 12:21 mark, a Rangers victory seemed inevitable. Oscar Lindberg's first career playoff goal made it 4-0, but then Game 2 four-goal hero Jean-Gabriel Pageau struck again, finally getting the Senators on the board.

Ottawa threatened to tighten things up early in the third, with the first six shots of the period. But the Senators couldn't get another one past Henrik Lundqvist.

Rangers strike early and often to take Game 3
Mats Zuccarello, Michael Grabner and Rick Nash each score to give the Rangers a 4-1 victory over the Senators to cut Ottawa's series lead to 2-1.