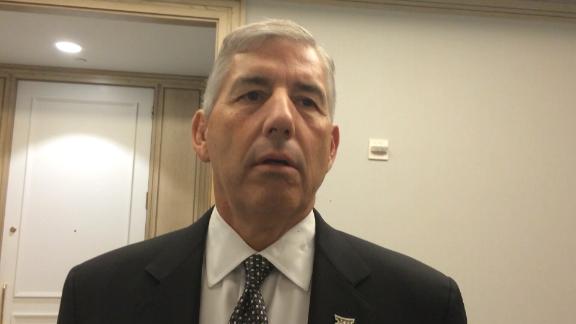 Houston and Brigham Young are the top Big 12 expansion candidates, according to an ESPN poll of the league's football coaches.

On the condition of anonymity, the league's 10 coaches participated in the poll. Each chose his top two candidates among schools not currently in a Power 5 program.

Cincinnati and Memphis tied for third with four votes each, followed by Colorado State and UCF with one vote apiece.

Other teams expected to be considered by the Big 12 include USF and UConn.

With the exception of independent BYU and the Mountain West's Colorado State, all of the expansion candidates are members of the American Athletic Conference.

To exit the AAC, members must provide 27 months' notice and pay a $10 million exit fee.

The Mountain West's exit requirement is only to provide one year's notice. If that is not provided, a university must pay the conference $5 million or double the school's final year's conference revenue, which ever amount is greatest.

The Big 12 won't give full shares to new members upon arrival. It's common practice for incoming schools to get partial revenue shares for a few years. TCU and West Virginia just finished their fourth seasons in the Big 12 and for the first time received full shares. That means for several years, the current 10 members get to share the new money. And which schools are willing to accept less money for the longest period of time could help determine whether an institution gets an invite from the Big 12.

The Big 12 coaches were in Bristol, Connecticut, on Wednesday as part of their annual "Car Wash" on ESPN's campus.